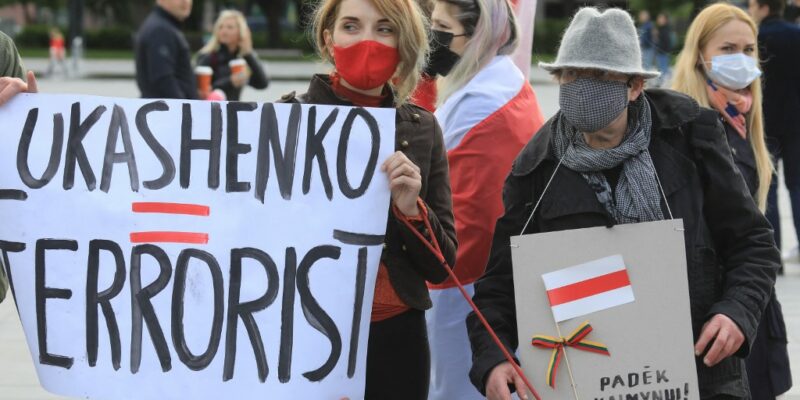 The European Federation of Journalists (EFJ), the European Council of Literary Translators’ Associations (CEATL) and the European Writers Council (EWC) call on the governments of Europe and the international community to demonstrate firm support for the democracy movement in Belarus and to provide refuge and humanitarian assistance to those fleeing the country.

One Year after the rigged elections in Belarus,the country is being overrun with a radical crackdown on free speech and humanitarian organizations by the dictatorial Lukashenko regime. More than 1,500 organizations have been targeted by the “radical cleansing”, 41 are already on trial for state-ordered dissolution, including the writers’ organization PEN Belarus and the Belarusian Association of Journalists (BAJ). The chairman of the Union of Belarusian Writers, poet Barys Piatrovich, is under house arrest and communication ban.

Since Lukashenko’s rigged re-election on 9 August 2020, over 40,000 people have been arrested in Belarus, including over 500 media workers, 1,200 cultural workers – writers, translators, musicians, actors – and human rights activists, as the immersive 2021 Report by the Belarusian PEN Centre shows.

“It’s a radical crackdown against the free press”, says EFJ President Mogens Blicher Bjerregård. “In recent weeks, the newsrooms of 70 media outlets have been raided, 28 journalists and media workers arrested and 50 websites blocked. EFJ Member, the Belarusian Association of Journalists (BAJ), is to be liquidated; the court case will start on 11 August. Arrested journalists, bloggers and editors have had to serve prison sentences and are being abused in prison. The situation of press freedom in Belarus is worse than it has been since independence in 1991.”

State-owned printing houses refuse to print independent newspapers. In May, dictator Lukashenko passed an amendment to the law on the mass media, which allows the authorities far-reaching interference with regard to freedom of information. It is forbidden to accompany demonstrations with live streams. Anyone carrying a mobile phone risks being named as an active organizer of the demonstration. Belarusian authorities have characterized anti-government protesters as “criminals” and “violent revolutionaries backed by the West”, and described the actions of their law enforcement agencies as “appropriate and necessary”, to “fight terrorism”.

More than 1,500 organizations and individuals have been targeted by this “radical cleansing” of the Belarusian regime, more than 50 are on trial for state-ordered dissolution, including the writers’ organization PEN Belarus, which will face charges from the Minister of Justice on 9 August. On 13 July, the office of the EWC member, the Union of Belarusian Writers, was also raided, and the chairman of the independent association, poet Barys Piatrovich, received house arrest and a communication ban, his technical equipment was confiscated.

“As PEN Belarus reported, the literary scene is being targeted in a particularly perfidious and arbitrary manner”, adds Shaun Whiteside, President of CEATL. “The news reaching us daily from Belarus becomes more dreadful by the day. The attacks on freedom of speech by the Belarusian government, especially as they affect writers, journalists and translators, is utterly intolerable, in Europe or anywhere else.” As the PEN Belarus Report says, pensioners who read books by Nil S. Hilevich, Yakub Kolas, Uladzimir Karatkievich on the train were accused of taking part in an “unauthorized protest action” because they read “opposition books”. Authors and translators critical of the regime are unerringly discredited on state television and their works sorted out in state bookshops. Customs inspect books sent abroad or from abroad, and confiscate works classified as “extremist”, including the novel “Revolution” by Victor Martinovich. Nobel Laureate Svetlana Alexievich is probably one of the most censored writers: it is now forbidden to mention her in school literature classe.

“We are witnessing a hateful state power that resorts to all means to slaughter the democracy movement and the freedom of speech,” says Nina George, President of EWC. “There are public calls on Belarusian state television to hang opposition members. Recently, the head of the Belarusian House in Kyiv, Vitaly Shishov, was found hanged in a park; he mainly helped fleeing Belarusians to find protection and stability in Ukraine. Our colleagues who are on the run ask us to call on European governments on their behalf to actively support the people of Belarus. After a year in which neither sanctions took effect nor the culture ministers of the EU and EEA were at least able to agree on a common stance in favour of the press and cultural workers of Belarus, it is time for Europe to actively defend the values of democracy – by supporting those who are suffering under Lukashenko’s violence.”

The European Council of Literary Translators’ Associations (CEATL), the European Federation of Journalists (EFJ) and the European Writers’ Council (EWC) call for solidarity on the part of all Ministers of Culture and Foreign Offices.

We request not only a clear protest in a common statement to the ongoing violence and repression in Belarus and to press the illegitimate Lukashenko’s regime to release political prisoners immediately. Furthermore, we demand extended and accelerated humanitarian and/or Schengen visas for fleeing Belarusians, especially, but not limited to, persecuted media and cultural workers, as well as financial and political support for those NGOs in neighbouring countries that intercept and support the fleeing Belarusians.

We also call on our colleagues in the press and the book sector to give a voice to those who are denied it in Belarus. Do not stop reporting on Belarus, print “banned books”, advocate for local scholarships and residencies. Because our commitment to democratic and human rights proves to those in Belarus who are fighting for their democracy that their resistance and immeasurable suffering is worthwhile.

The European Council of Literary Translators’ Associations (CEATL) is the federation of 35 member associations from 29 countries, representing 10,000 individual translators.