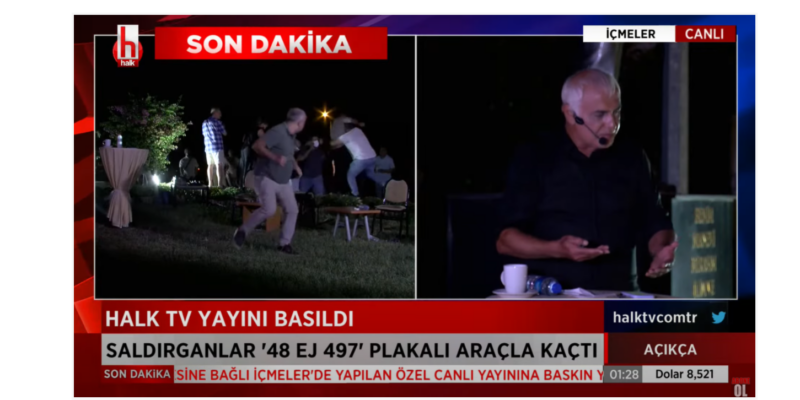 
A team of the Turkish TV channel Halk TV was attacked in the İçmeler area of Marmaris. The aggressors threatened to block the channel’s live broadcast from the fire-hit region and a cameraman was targeted with a broken glass bottle. This incident occurred after a recent threat by the government-controlled RTÜK (Turkey’s Radio and Television Supreme Council) to TV stations over their critical coverage of the wildfires, which have been raging across the country for the past few days. The European Federation of Journalists (EFJ) joins its Turkish affiliates, the Journalists’ Union of Turkey (TGS), the Journalists’ Association of Turkey (TGC), the Journalists’ Association (GCD) and the Broadcast and Printing Press Workers Union, in condemning this assault and calls for swift investigations by the authorities.

On the night of August 6th, Halk TV was broadcasting live from İçmeler for the program “Gökmen Karadağ ile Açıkça” (Openly with Gökmen Karadağ). The program critically discussing the scorching wildfires was presented by Gökmen Karadağ. The journalists İsmail Saymaz and Murat Ağırel, as well as Marmaris Mayor Mehmet Oktay and Lawyer Salim Şen, were present. At around half past midnight, five attackers raided the scene and threatened to block the TV channel from filming if they did not agree with what was being said. According to media reports, one aggressor also broke a glass bottle and targeted the Halk TV cameraman. The program coordinator, Candan Yıldız, tried to prevent the attackers from approaching.

Gökmen Karadağ paused the broadcast and also tried to stop the attackers with the help of his guests. The broadcasting continued after the assaulters left in a vehicle registered in the province where Marmaris is located. Five people were detained in connection with the attack, but they were later released from custody. Candan Yıldız said that Sertan Y., one of the assaulters, is working at the Marmaris District Organisation of the ruling Justice and Development Party (AKP). The Halk TV crew filed a criminal complaint at the police station.

The Journalists’ Association (GCD) reacted with a statement, saying: “Organised attacks against press freedom can silence neither Halk TV nor journalism.” GCD President, Nazmi Bilgin, emphasised that as the targeting of journalists by politicians and officials continues, it is inevitable that such attacks will increase.

This attack happened just days after RTÜK issued a written warning to Turkish TV stations over their coverage of the wildfires: On 3 August, the media regulator asked the TV stations to also cover fires that have been successfully extinguished, otherwise, it would be “inevitable to impose the heaviest sanctions”. RTÜK has been accused of becoming increasingly conservative under the ruling AKP and acting arbitrarily when issuing fines against programs critical of the government. President Recep Tayyip Erdoğan and his AKP government have been facing increased criticism over their handling of these large-scale wildfires, where at least eight people have died.

Ricardo Gutiérrez, EFJ General Secretary, reacted: “The written threat by RTÜK and the physical attack against Halk TV are a serious blow to press freedom. Critical reporting on the devastating wildfires must be enabled rather than restricted or orchestrated. We urgently call on the Turkish authorities to hold the attackers accountable and also prevent further aggressions towards journalists.”