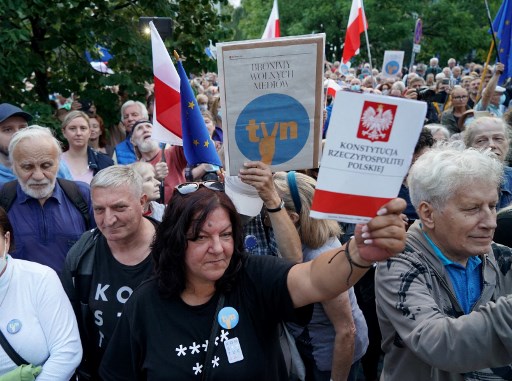 Lex TVN was passed with 228 MPs in favour, 216 against and 10 abstentions. The EFJ and IFJ call on the Senate to reject the bill, and the European Union to counter the attack on the independence of TVN channels.

The Polish parliament is discussing measures to ban non-European owners from controlling more than a 49% stake in Polish media companies. The move, dubbed the “lex TVN”, represents a direct attack on the critical and independent US-owned TVN and TVN24.

The bill would effectively push the US company Discovery Inc. to sell its controlling stake in TVN. Next to this draft bill, there is an ongoing deadlock over the renewal of the license for the 24-hour news channel TVN24, which has also been sharply criticised by journalists and journalists’ organisations. These efforts by the ruling Law and Justice (PiS) party are seen as a systematic effort to weaken critical journalism in the country. TVN broadcasts the most-watched news program, Fakty, and has followed a critical editorial stance towards PiS.

The proposed law led to nationwide protests in Poland on 10 August 2021. It has also generated international alarm: In particular, top U.S. officials, including the heads of the Foreign Relations Committee of the U.S. Senate, have expressed grave concern over the effort to rein in TVN.

“Once again, this bill puts Poland in the spotlight regarding the country’s situation for media freedom and pluralism. We have already been observing an alarming deterioration and urge the Sejm not to let the conditions become even more similar to those in Hungary. The vote against this bill should be about the core principles of democracy and the right of the Polish people to receive information from various sources,” said EFJ General Secretary Ricardo Gutiérrez.

IFJ General Secretary Anthony Bellanger said: “The “lex TVN” bill, which is really intended to better control dissenting voices, is a worrying sign of the deterioration of press freedom in Poland. Under the guise of “repolonisation” of the media landscape, the government is trying to legitimise a form of censorship. We call on the Polish Parliament to hear the protests and vote against the bill.”

The Polish Prime Minister Mateusz Morawiecki said that the law was not directed against anyone but sought to protect Polish society. The PiS has cited the risk of media being controlled by hostile powers such as Russia and China and claims the nationalisation of the media is for national security reasons.