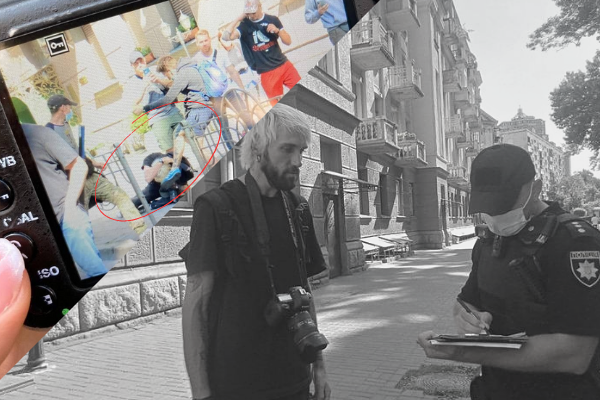 The photojournalist Oleksandr Kuzhelny from the online media Bykvu was brutally beaten after a right-wing rally in the center of Kyiv on 14 August. The National Union of Journalists of Ukraine (NUJU) reported the incident. The European Federation of Journalists (EFJ) joined its affiliate in the call on the authorities to hold the attackers to account and better protect journalists during demonstrations.

The incident occurred after a protest at the Ukrainian President’s residence in Bankova Street called “Stop the capitulation”. Various nationalist groups had come together to protest against recent “repressions targeting Ukrainian nationalists”. The gathering soon turned violent as clashes erupted between the protesters and the police.

Already during the demonstration, at least two media workers were attacked: As reported by the NUJU, online media Vesti.ua correspondent Valentyn Bannykh was hit by tear gas and the cameraman of the national TV channel 1+1, Anton Filipp, was injured. Filipp was attacked after some activists identified the symbols of the 1+1 TV channel on his camera. “The operator suspects a concussion, he is under medical supervision,” NUJU President Sergiy Tomilenko informed.

Following the protest, photojournalist Oleksandr Kuzhelny was approached by a group of people who aggressively demanded the removal of the photos he had taken during the event. After threatening him, they started severely beating Kuzhelny. As can be seen on video recordings, Kuzhelny fell to the ground and suffered numerous kicks to his head. As was the case with Anton Filipp, the attackers were aware that Kuzhelny was working as a journalist:

“I told them I was a journalist, I was reporting. They asked about my job, I showed my journalist card. They didn’t let go at that, called me ‘a leftie’. I offered them to come up to Andriy Biletsky (one of protest organisers) so that he could confirm that I am a journalist. They refused. One of them kicked my leg, another one punched me in the head and I fell”, told Kuzhelny.

According to Bykvu, the attackers filmed the incident and uploaded the video on a Telegram channel.

The photojournalist sustained visible bruises and an ambulance was called. Kuzhelny also reported the assault to the police and documented the injuries.

Protests organisers and police identified two attackers, who are 17 and 20 years old. The young men publicly apologisedand claimed that they had beaten the photographer because “they had received false information”. According to a statement by the Kyiv Police Communication Department, the defendants face up to five years in prison for this crime. They are also aiming to establish the role of other participants in the offense. Andrey Biletsky, the leader of the far-right political party “National Corps” arrived at the scene, helped with the ambulance and police, and assured that the attackers were not members of his organisation.

NUJU President Sergiy Tomilenko commented: “Apologies do not absolve from responsibility for attacking a journalist! The police must establish all details of the crime and the role of each of the attackers. A brutal attack on a journalist should be severely punished, not justified.”

The EFJ General Secretary, Ricardo Gutiérrez, said: “Oleksandr Kuzhelny, Anton Filipp and Valentyn Bannykh are yet another addition to the devastating list of journalists being attacked during demonstrations. The authorities must do their best to protect the press in such a hostile environment. We call for meticulous investigations to hold all involved attackers accountable!”