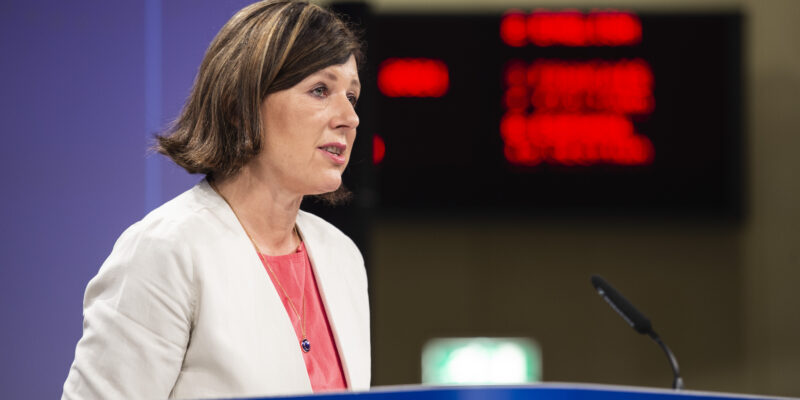 Vice-President of the European Commission Vera Jourova presented a Recommendation ‘on ensuring the safety of journalists’ on 16 September 2021. The European Federation of Journalists (EFJ) welcomed this timely recommendation as well as the Commission’s commitment to the safety of journalists. However, as this legislation is non-binding, the EFJ stressed the need to swiftly put in place a mechanism to thoroughly monitor significant action of Member States towards this end.

“This must not continue, this must not be happening. No journalist should die or be harmed for doing their job. Today, we ask Member States to act and we put forward a series of measures they should take,” said Commissioner Jourova. She promised to engage with Member States individually as well as in the European Council.

“This is a very strong call on the Member States: do not underestimate the threats and the warning signs that journalists are under real risks,” she added.

The recommendation incites Member States to:

In addition, specific guidance addresses the role of journalists during protests and demonstrations, online safety and digital empowerment as well as the protection of female journalists and those belonging to minority groups who face particular threats.

EFJ president Mogens Blicher Bjerregard said: “We welcome this recommendation, which also covers the social and economic situation of journalists and explicitly mentions freelance journalists. It also highlights media self-regulatory bodies as key stakeholders in prevention, awareness raising and training – next to journalists’ associations and trade unions, the latter not being explicitly mentioned. All this demonstrates the Commission’s commitment to further defend the democratic values on which the European Union is founded. At the same time, it is regrettable that we have reached a situation where the European Union has to remind states of their basic obligations. It proves, by default, the passivity of states when it comes to defending press freedom and decent working conditions for journalists.”

“We only regret that the Commission does not go further in establishing a mechanism to evaluate the implementation of the 30 recommendations by the Member States. We must be able to point the finger at those states that don’t do enough to protect journalists and media workers. We call on the European Union to put in place an independent assessment mechanism to denounce states that harm journalists and endanger the public right to be informed,” added Renate Schroeder, EFJ Director.

The EFJ further calls on its members to make sure that this recommendation is implemented at national level and that journalists’ trade unions and associations will be involved in the process.

The recommendation ‘on ensuring the safety of journalists’ comes the day after the State of the Union address by Commission’s President Ursula von der Leyen, which for the first time included a strong statement in favour of media freedom.