EFJ joins call for Greek Euronews service to be continued 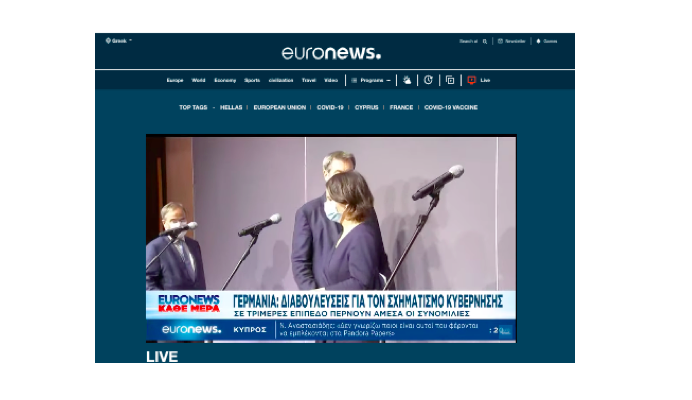 Greek service of pan-European television channel Euronews is threatened with closure before the end of the year. The service, which is funded by the European Commission, could become the first broadcaster in an official EU language to be shut down. The European Federation of Journalists (EFJ) joined its affiliates, the Journalists’ Union of Athens Daily Newspapers (JUADN) and the Journalists’ Union of Macedonia and Thrace (ESIEMTH), in calling for the Greek service to be continued to preserve media pluralism and secure jobs.

The news follows a press conference held this summer between Euronews Greece CEO Michael Peters and Euronews Greece employees, during which Peters announced that the withdrawal of funds for the public broadcaster had been discussed with the European Commission. While the span of “a few years” was mentioned during the meeting, the broadcaster risks closing from 15 December 2021. The company has already ended the collaboration with freelancers, but an additional 24 journalists, plus technical and administrative staff are now also at risk of losing their jobs. By the end of November, 15 more employees will be laid off.

As soon as the suspension of Euronews Greek Edition was known, JUADN addressed letters to the Greek Prime Minister Kyriakos Mitsotakis, European Commission President Ursula von der Leyen, Commission Vice-President Mr. Margaritis Schinas, Commissioner Thierry Breton and all Greek and Cypriot MEPs. The letter underlines the fact that Greeks and Cypriots citizens are “an important part of the European public and not a negligible minority”. It urged the Commission to ask the Euronews management to revoke the decision of closing the offices.

“The reason cited by Euronews management, i.e. Greek language’s low pervasiveness is completely ignoring its cultural value since it was spoken by Europe’s most ancient civilization, as well as its significance for Greece and Cyprus and the Greek Diaspora all over the world. Since Greeks and Cypriots are an important part of the European public and not a negligible minority, as you understand this decision impinges on the Greek language and directly affects multilingualism, a value embraced and promoted by the European Union,” says the letter, reminding that television is the most widespread means of information. It added: this decision “violates journalists and media workers rights, threatens the quality of news information and delivers a blow to European culture.”

JUADN President Maria Antoniadou stressed that this decision will lead the journalists to unemployment, “despite their successful service for almost 10 years, being professional skills and efficiency.”

EFJ President Mogens Blicher Bjerregård said the closure of Euronews Greece would be a grave hindrance to media freedom and media pluralism in the country and the rest of Europe: “It is crucial to maintain the Greek service of Euronews – in particular in times of health crisis – a channel which is providing reliable and professional information to citizens. The European Union has in the past declared its commitment to media pluralism, multilingualism and multiculturalism. To be consistent with its policy, the EU must restore the funding.”

The unions insisted that the European Commission has a duty to prevent the closure of the broadcaster. Euronews Greece’s employees have called on the European Commission to stay true to the inherent values of Europe of equality amongst the Member States and the languages and not favour one country over another because of economic, financial or demographic reasons.