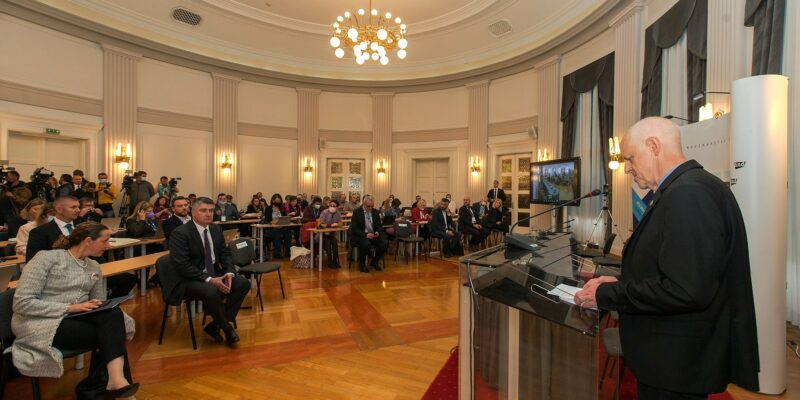 Welcoming you all to the EFJ Annual Meeting 2021 in Zagreb, Croatia, we will start with the great news of today that the Nobel Peace Prize winner this year is press freedom and journalism. Maria Ressa, one of the most courageous and prominent investigative journalists from the Philippines, and the editor-in-chief of an independent newspaper in Russia, Dmitry Muratov, are the well-deserved announced winners, and this will have an enormous impact on press freedom.

Choosing the editor-in-chief at Novaja Gazeta, where Anna Politkovskaya and other killed journalists worked, is extremely important. We send both winners our greetings. Also, we want to use this opportunity to put press freedom on the highest international level, and I urge all of you to be outspoken. We will even have another chance, namely when they will be in Oslo in December to receive the prize.

“Better protecting journalists” is the headline of this annual meeting. This is very sadly a true label of the current situation in Europe, where press freedom and the situation for journalists have deteriorated.

The EU failed to make it mandatory for its member states to use the recovery plan also for journalists. However, we at the EFJ succeeded in negotiating a significant fund of 320,000€ for our affiliates and overhead to our office to deal with it. We have now called for proposals from you on projects aiming to recover after Covid.

The situation for safety has unfortunately not improved. Since our last annual meeting, we again have faced killings of journalists in Europe, and particularly two groups of journalists are targeted, namely, investigative journalists: Peter de Vries from the Netherlands and Giorgos Karaivaz, Greece – both shot down. We also see how journalists are getting harassed during demonstrations in more and more countries. This summer it has a fatal consequence for Alexander Lashakarava, Georgia, who was one out of 55 journalists injured. He died a week after the brutal attack. In Turkey, the radio presenter Hazim Özsu was killed because someone did not like his work. Warzones are also still a dangerous area for journalists. Maharram Ibrahimov and Siraj Abishov from state media in Azerbaijan were killed by a landmine explosion in Nagorno Karabakh. Six killed journalists in Europe during the last year. Furthermore, 147 journalists are currently in jail in Europe with Turkey and now also Belarus having the highest numbers of jailed journalists.

In some European countries, you have established working groups or national action plans to improve the situation for safety. I believe it is crucial that we continue that work related to both recommendations from the Council of Europe and the UN plan of action for the safety of journalists and the issue of impunity.

Safety is also an issue for our colleagues in Belarus where we have witnessed an appalling development for journalists and media. I want to thank all of you, our affiliates in Europe, for supporting Belarusian journalists. It is extremely important that we in such a situation show solidarity and also concrete support as we have seen from many of you. Recently, General Secretary Ricardo Gutiérrez, Adrien Collin and I had the possibility to meet the leadership of the Belarusian Association of Journalists to assess the situation and to develop new tools for a more long-term perspective.

Not to forget the continuous attack on press freedom in Turkey still with journalists held behind bars and what we have witnessed in many parts of Europe. We are reporting everything to the safety platform at the Council of Europe and our new MFRR-platform together with ECPMF, the European Centre for Press and Media Freedom, that we are working very close together with.

At the EU level, together with ECPMF and other partners, we have been pushing the EU commission to deliver a directive to counter SLAPPs, Strategic Lawsuits Against Public Participation. The EU is now also focusing firmly on safety and the next step we should be advocating for is to make annual assessments on each member state.

We should also welcome the initiative from Vera Jourova, the EU commissioner on European values and transparency. The initiative is about a Media Freedom Act that should allow the EU more firmly to intervene when governments in countries like Poland, Hungary and Slovenia are targeting media freedom. I have invited the commissioner to take part in our Free European Media conference in Gdansk on 17-18 March 2022 to discuss this initiative with European journalists.

You have in your documents a list of all the projects we are involved in. All of them are in line with and are supportive of our working program. I won’t touch on all of them, but you are very welcome to ask questions about them. Also, you have the activity report that I am not going to repeat in this speech. As you can see, we have a huge lobbying activity and a great collaboration with a large number of relevant organisations.

One initiative that we have been advocating for decades is to improve working conditions for our freelancers, and always we have met the wall called competition rules. Thanks to our Irish colleagues putting this topic on top of the agenda and succeeding in a significant improvement, we at the EU level now can foresee changes in the guidelines on how to understand the competition rules. We don’t know the outcome yet, but we see good options for improvements to include freelancers and solo-self-employed in the list of those who are exempted from the rules, which means opening up for collective bargaining for our freelancers. This will be a significant step forward.

At the organizational level, the Russian Union of Journalists has become a former affiliate as they sent us a letter announcing that they wanted to leave the EFJ. They haven’t paid their fees for three years now. Of course, it is their decision, but I am very unhappy that the RUJ at our Lisbon meeting three years ago promised to pay their 2018 fee for their votes at the meeting as they claimed it only was a delay. On these conditions, the annual meeting allowed our Russian colleagues to vote, but they never fulfilled their part of that agreement.

Fortunately, we are now working very closely with another and new independent journalists’ union in Russia and are looking forward to having them as full members as soon as possible. This brings to two initiatives that we are preparing for our general meeting next year:

First, with assistance from a local journalist in Central Eastern Europe, we are assessing in some countries with very few journalists organized and with a very little response to work on how we better can reach out to them. There are many networks of journalists, and it is important that the EFJ is seen as an inclusive federation ready to be innovative also when it comes to membership and partnership.

Second, the administrative committee is setting up a working group to evaluate how we can adjust our statutes better to reach out. At this point, we also must adjust our statutes due to Belgian law. We are looking into that, and any proposal from you on this matter is welcomed. We will deal with that and present it at the General Meeting.

Finally, I want to thank our General Secretary and the staff for the great job you are doing, your ongoing commitment also during difficult times.

I have not touched on everything in my speech, but please ask questions and let’s have a fruitful debate. Thank you.