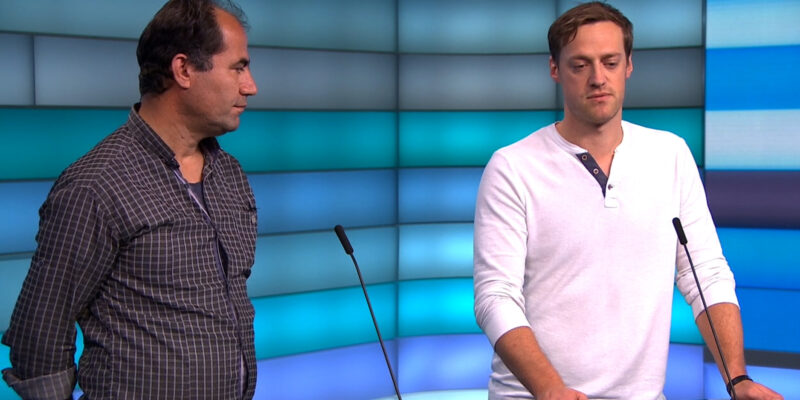 Credits: Screenshot from the press briefing at NRK

Two Norwegian journalists working for the Norwegian Broadcasting Corporation (NRK) were arrested by Qatari authorities for 36 hours. They had been covering the poor working conditions for migrant workers in preparation for the 2022 FIFA World Cup. The European and International Federation of Journalists (EFJ-IFJ) and their Norwegian affiliate, the Norwegian Union of Journalists (NJ), strongly condemn this detention and call on the Qatari authorities to provide full explanations for the arrests and to enable free journalism.

On Sunday, 21 November, journalist Halvor Ekeland and photographer Lokman Ghorbani were detained outside their hotel in Doha before their flight back to Norway. They were released from custody over 30 hours later on Tuesday 23 November in the morning and departed Doha the same day, safely arriving in Oslo on 24 November. Their equipment remained confiscated.

Ekeland and Ghorbani were in Qatar to cover the one-year mark before the beginning of the FIFA World Cup 2022. Shortly before their arrest, they had reported on the work and living conditions for migrant workers during a live broadcast on the NRK news program Sportsrevyen. Ekeland had told viewers there were “stark contrasts”, with some workers “doing awfully” or having “fear in their eyes”.

Previously, media outlets and human rights organisations had reported on the systemic exploitation and high numbers of deaths of migrant workers while building soccer venues in the searing heat since 2010. Investigations into the brutal working conditions caused international outrage, leading to Qatar announcing sweeping labour reforms in 2019. However, many workers say that the conditions have not really changed.

Ekeland told Norwegian media VG: “We have been questioned, but are first and foremost happy to be back in Europe. We’ve had a hard time. We will have a number of meetings with NRK and find out a number of things, and come back with comments eventually.”

The NJ is satisfied that Norwegian Prime Minister Jonas Gahr Støre has strongly condemned the arrests, calling them “unacceptable”. Norway’s Minister of Foreign Affairs has called in the ambassador of Qatar, demanding an explanation.

NJ President Dag Idar Tryggestad denounced the detention: “This is an unjustified attack on press freedom. The authorities of Qatar are trying to prevent journalists from presenting a broad picture of what is happening in the country.”

EFJ General Secretary Ricardo Gutiérrez reacted: “Journalists must continue to investigate human rights violations. We call on journalists to protect their sources and to take appropriate safety measures when operating in authoritarian countries.”

IFJ General Secretary Anthony Bellanger said: “Thousands of workers have been slaving in the construction of Qatari stadiums for the 2022 World Cup and the public has the right to know the truth. Independent reporting is key to safeguard democracy and we urge the Qatari government to come up with a full explanation on what appears to be a clear attempt to intimidate our NRK colleagues.”

Qatar defended the arrests, stating that the reporters had been detained following complaints of trespassing by the owner of private property. The journalists said they had oral permission.