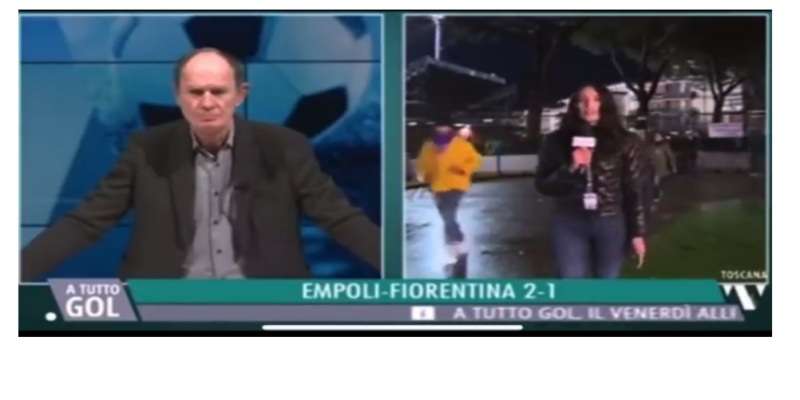 
Journalist of Toscana TV Greta Beccaglia was groped by a football fan while she was reporting live from the Empoli vs Fiorentina game in Empoli on 27 November 2021. The European and International Federation of Journalists (EFJ-IFJ) joined its Italian affiliate, the FNSI, in strongly condemning this intolerable attack and calling for solidarity with Greta Beccaglia.

The female journalist was interviewing fans pouring out of the Empoli stadium after the match when one fan approached her and slapped her on the backside – live on Toscana TV. Beccaglia reacted calmly, saying “Sorry, you can’t do this,” and professionally continued her report. Instead of condemning the incident, Giorgio Micheletti, a male colleague in the studio told Beccaglia on air: “Don’t take it.”

The video went viral just hours after the celebration of the International Day for the Elimination of Violence against Women. During the Empoli vs Fiorentina game, players had red marks on their cheeks to promote the campaign “give violence against women the red card”.

The FNSI strongly deplored both the harassment as well as Micheletti’s reaction in a statement: “No one has the right to touch a woman without her consent, in any context, and no one should feel entitled to seek mitigating factors, feeding stereotypes that are still cloaked in information, including sports information”, said the Equal Opportunity Commission of FNSI and Usigrai as well as the association GiULiA. On Twitter, FNSI President Giuseppe Giulietti said the union is ready to provide legal assistance to Greta Beccaglia.

Micheletti later apologised for his response, saying he did not want to minimise the attack.

Beccaglia later said on her Instagram story: “What happened to me is not acceptable and should not be repeated. My harassment was recorded live on TV because I was at work, but unfortunately, as we know, these things happen to other women with the cameras off, without anyone knowing about it.”

Ricardo Gutiérrez, EFJ General Secretary, said: “Sadly, once again, this incident shows that we need to raise awareness about gender-based violence in all walks of life. We stand in solidarity with female journalists experiencing harassment every day. We also call on media professionals to strongly denounce such attacks on their female colleagues.”

IFJ General Secretary, Anthony Bellanger, said: “We stand in solidarity with journalist Greta Beccaglia, who suffered an unacceptable episode of sexual harassment while doing her job. We call on the Italian authorities to identify and punish all those individuals who harassed our colleague. This incident can’t go unpunished. We call on world media to adopt a zero tolerance approach on violence against women.”

The Empoli police have identified the molester, a Fiorentina fan, by crossing the live video with surveillance camera footage of the stadium.