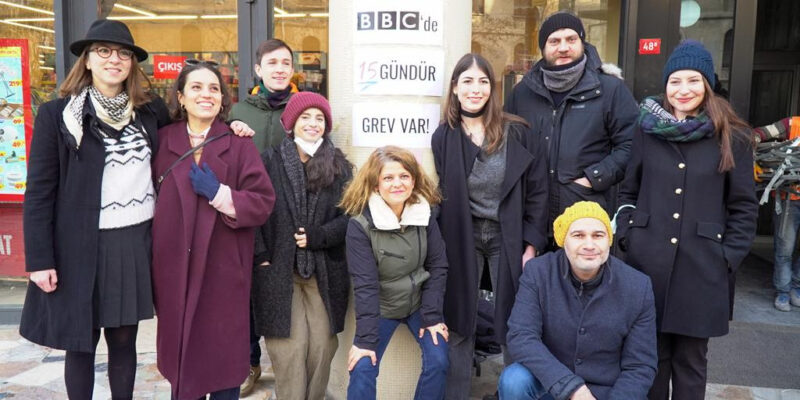 A dozen employees at the BBC Istanbul bureau, supported by the Journalists’ Union of Turkey (TGS), have finally seen their demands met on 28 January 2022, after a historic 15-day strike.

The journalists got an annual pay rise of 32%, private individual and family health insurance, a daily 60TL lunch voucher and 1,200TL support for glasses and contact lenses.

The labour action was prompted by the skyrocketing inflation rate in the country (nearly 36%) and no adequate access to health care since the Covid-19 pandemic, after a five-month negotiation process with the BBC that was not successful.

The strike, the first one in the media sector since 2009 and the first ever among foreign media in Turkey, was backed by the European Federation of Journalists (EFJ), the National Union of Journalists (NUJ) in the UK and Ireland, UNI Global Union and UK media union BECTU. Many journalists’ trade unions and associations in Europe also sent solidarity messages to their Turkish colleagues last week.

The TGS thanked all the persons and organisations for their unwavering support: “The BBC Istanbul bureau employee’s success is only the beginning. The motivation and morale given by the strike will encourage colleagues experiencing lack of security, low wages and poor working conditions in the media sector to unite and fight under the union’s roof,” said TGS General secretary and EFJ Steering Committee member Mustafa Kuleli.