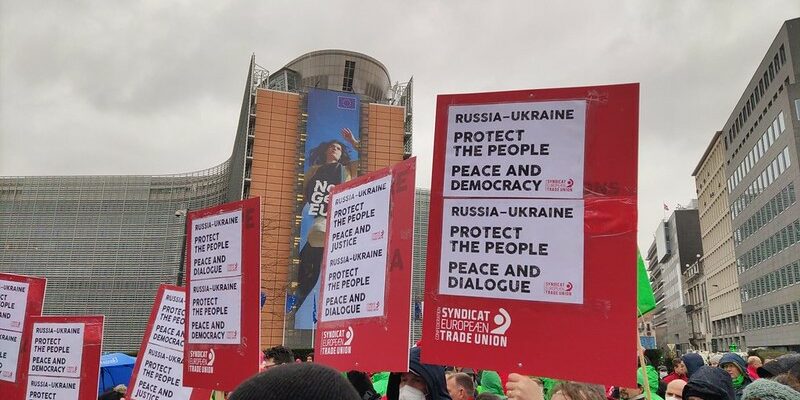 The European Federation of Journalists (EFJ) today joined a new call by the European trade union movement to the European Union and its Member States following the armed aggression by Russia against Ukraine. The EFJ joins the European Trade Union Confederation (ETUC) in reiterating its condemnation of the attack, demanding the immediate stop of military operations, Russian troops to leave the country, and dialogue and talks for peace to be started.

Here is the press release published on 27 February by the ETUC, which is the voice of workers and represents 45 million members from 92 trade union organisations in 39 European countries, plus 10 European Trade Union Federations, including the EFJ:

Within days of Putin’s unacceptable military attack on Ukraine, the situation is continuously deteriorating with devastation in the country, thousands of victims among civilians and military forces, hundreds of thousands of refugees displaced within Ukrainian territory and crossing the borders to neighbouring countries in precarious and dangerous conditions.

The ETUC reiterates its condemnation of the attack, demands the immediate stop of military operations, Russian troops to leave the country, and dialogue and talks for peace to be started.

The ETUC demands that the European Union institutions and Member States :

The ETUC is constantly in touch with Ukrainian trade union colleagues to ensure solidarity and support, and in coordination with its affiliates, the ITUC and PERC is ready to: