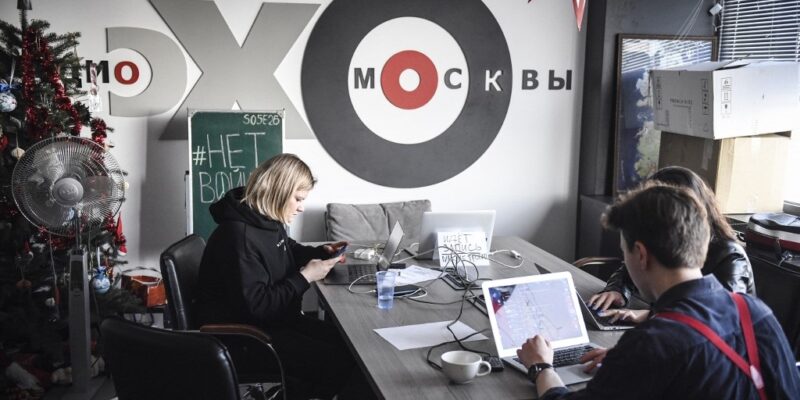 Picture credit: AFP. Journalists work at the office of radio Ekho Moskvy in Moscow on March 3, 2022.

The International Federation of Journalists and the European Federation of Journalists (IFJ-EFJ) deplore the spiral of censorship in the European media landscape. In response to the EU censorship of the Kremlin-backed channels RT and Sputnik, the Russian authorities are closing down independent media outlets in Russia. The IFJ and EFJ call on the EU to support independent Russian journalists and media outlets that continue to operate in an increasingly repressive environment.

On Thursday, two of the most influential independent Russian media outlets, symbols of Perestroika, Ekho Moskvy and TV Dozhd, were dismantled. Others have been blocked or are threatened with closure: Mediazona, Doxa, The Village, Zvezda (Perm), TV2 (Tomsk), Vecherny Krasnoturyink, Vecherny Karpinsk, Pro Severouralsk, Globus (Serov), Znak.com (Ekaterinbourg)… The radio station Silver Rain, under the slogan “We can’t tell the truth anymore, but we don’t want to lie”, reported that from now on it would only broadcast music.

On Friday, the state-owned Russian RIA news agency reported that in addition to blocking BBC News, the Russian communications watchdog Roskomnadzor (RKN) has also restricted access to the US government-funded Radio Liberty, US state-owned radio broadcaster Voice of America, Meduza (a Russian and English-language news site based in Latvia), and German state-owned broadcaster Deutsche Welle.

The State Duma passed on Friday a law that increases penalties for spreading alleged disinformation about the Russian armed forces. Media and journalists now face up to 15 years in prison.

BBC boss Tim Davie said the BBC was halting its coverage in Russia, as new legislation passed “appears to criminalise independent journalism”. “It leaves us no other option than to temporarily suspend the work of all BBC News journalists and their support staff within the Russian Federation while we assess the full implications of this unwelcome development.”

“The consequences of the war in Ukraine and the EU’s censorship of the Kremlin’s propagandist media are being felt heavily in Russia,” says a Russian journalist. We are really facing a Belarusian scenario of total eradication of independent media. Dozens of media outlets and hundreds of journalists are affected. Even journalists from the state media are leaving their newsrooms because they feel they are no longer able to do their job honestly.”

Some have resisted, such as the editorial staff of Radio Ekho Moskvy, which has announced that it will continue to broadcast its programmes on the internet. But many believe that this will not last…

“The European Union, which has contributed to this new wave of repression by banning RT and Sputnik, has a responsibility to assist independent Russian media and journalists,” said IFJ General Secretary Anthony Bellanger.

“The EU must facilitate the granting of visas, provide for the evacuation of those who want to leave Russia, and assist the media who wish to relocate abroad. Europe must assist Russian journalists who are facing brutal repression,” added EFJ General Secretary Ricardo Gutiérrez.