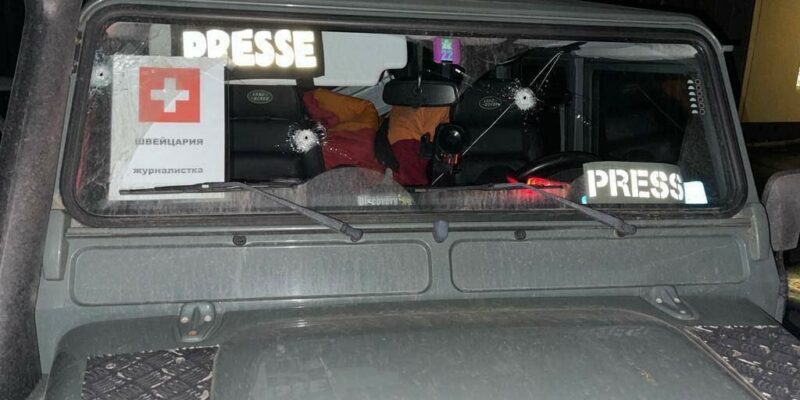 Within just a few days, a UK Sky News crew, as well as a Swiss independent journalist, were attacked by Russian forces in Ukraine. The European and International Federation of Journalists (EFJ-IFJ) strongly condemn the targeting of media workers as part of the war in Ukraine and call for the establishment of a special international tribunal for war crimes in Ukraine.

On 6 March, Swiss freelance photoreporter Guillaume Briquet was shot and robbed by Russian soldiers while operating in the Mykolayiv region, in southern Ukraine. The journalist was driving his armored car with clear press marking and had just passed the Ukrainian checkpoint located at the Premier Oil gas station when Russian forces attacked: Several bullets hit the vehicle and resulted in facial and forearm injuries. After being obliged to stop, Russian warrants took his documents, cash, laptop, photo, video, and other valuable objects for his work and safety.

According to Ukrinform, the national news agency of Ukraine, Briquet went to the territory of the Kirovohrad region as soon as possible where the Ukrainian police of Kropyvnytsky helped him reach a medical facility to receive medical care.

This is the second Russian army attack on international media workers in just a few days. On 28 February, a British television crew for Sky News was ambushed while covering the war in Ukraine. Despite their shouting that they were journalists, they were shot at various times: a bullet hit Chief correspondent Stuart Ramsay in his lower back while camera operator Richie Mockler was shot twice in his flak jacket. They eventually found refuge in a nearby garage and Ramsay and his team were safely repatriated to the UK on Friday 4 March.

IFJ General Secretary Anthony Bellanger said: “Attacks against journalists should be strongly condemned by international authorities. These events show the urgent need for a collective effort to protect media professionals in war zones: these crimes should not stay unpunished.”

EFJ General Secretary Ricardo Gutiérrez said: “After the attack on a Sky News crew’s vehicle by a Russian ambush group near Kyiv on Monday, this new targeted attack on a Swiss photojournalist shows that, in most of the conflicts, the warring parties do not hesitate to target journalists on assignment. These are war crimes. The EFJ calls for the establishment of a special international tribunal. The international community must prosecute the perpetrators of these crimes.”