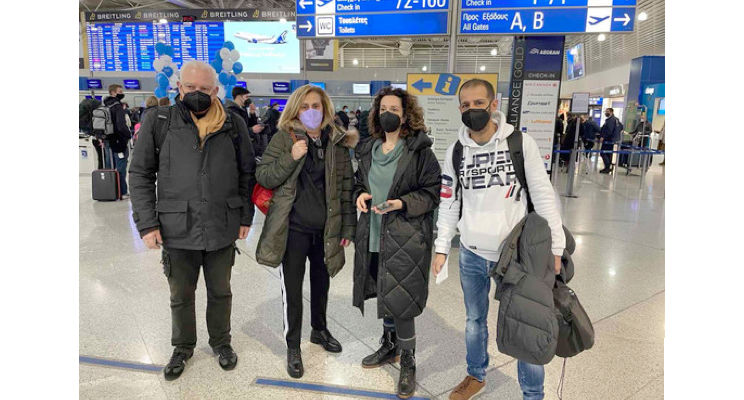 A solidarity mission carrying half a ton of humanitarian aid for Ukrainian journalists left Athens on 9 March, headed by Maria Antoniadou, the President of the Journalists’ Union of the Athens Daily Newspapers (JUADN).

The aid, which will be delivered to IFJ/EFJ affiliates the National Union of Journalists of Ukraine (NUJU) and the Independent Media Trade Union of Ukraine (IMTUU), includes:

JUADN have also donated €2,000 in cash to the IFJ/EFJ International Safety Fund to support journalists under threat as a result of the war.

JUADN President Maria Antoniadou said: “Solidarity is our weapon. The Journalists’ Union of the Athens Daily Newspapers Executive Board from the first moment of the Russian invasion of Ukraine is in contact with the European and the International Federation of Journalists and Ukrainian journalists’ unions to provide assistance and support to our colleagues and their families”.

“JUADN in collaboration with EDOEAP and PFJU, stand by the side of Greek and Ukrainian colleagues to facilitate their work, defend media freedom and freedom of expression, because, as known in difficult times like in war, truth is the first casualty.”

Stavros Kapakos President of EDOEAP Executive Board and member of JUADN Executive Board said: “Greek journalists and media workers effectively express support to our Ukrainian colleagues struggling to provide news in unusual and particularly difficult conditions due to the Russian invasion of Ukrainian territory and the ongoing military operations. In response to the call of Ukrainian journalists’ unions as well as the European and the International Federation of Journalists, we support our colleagues in Ukraine, sending essential medical supplies and declare we are ready to provide any possible assistance in the future.”

In a joint statement, IFJ General Secretary Anthony Bellanger and EFJ General Secretary Ricardo Gutiérrez said: ”This is an incredible show of solidarity which is providing vital support to our colleagues in Ukraine. We remain committed to building on this kind of example to deliver ever more solidarity and humanitarian assistance as the war intensifies and more and more journalists are at risk”.

The IFJ and EFJ today thanked European affiliates who contributed to the appeal for donations to assist Ukrainian journalists. Many journalists’ organisations have contributed, including those in the Czech Republic, the UK and Ireland, Greece, Norway, Finland… The IFJ and EFJ are also calling on individuals to contribute: