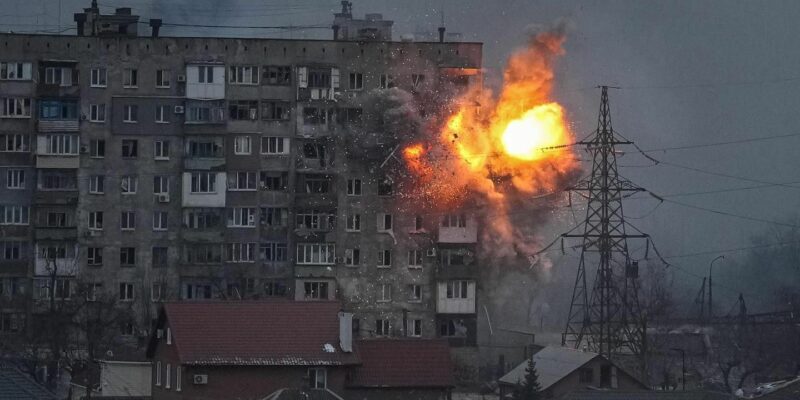 The European Federation of Journalists (EFJ) today called on the international community to put pressure on Russia to end the blockade of Mariupol in Ukraine. A large-scale humanitarian disaster in this major city in eastern Ukraine must be avoided. The EFJ supports its Ukrainian affiliates, the National Union of Journalists of Ukraine (NUJU) and the Independent Media Trade Union of Ukraine (IMTUU), in their efforts to evacuate journalists and media workers from Mariupol.

After a series of failures due to the lack of a ceasefire, evacuations in Mariupol accelerated on Tuesday as residents ran out of food and water. About 20,000 people left Mariupol in 4,000 cars today.

According to NUJU, at least 50 media workers are still being held hostage in a city that has long suffered from a lack of electricity, central heating and water due to direct shelling and attacks by the Russian army.

While the overall situation remains worrying, the EFJ welcomes the successful evacuation of two journalists from Mariupol: “Our colleagues Iryna Horbasyova and Serhiy Vaganov have arrived in Zaporizhiya, Ukrainian-controlled territory. They left Mariupol on Monday afternoon and spent the night in Berdyansk,” commented NUJU First Secretary Lina Kushch.

“We escaped from hell,” said colleagues. The Russian occupiers destroy the city. First they drop bombs, then they bring in the air force. On Monday, from 4 a.m. to 1 p.m., Iryna Horbasyova and Serhiy Vaganov counted 21 air attacks. Each Russian plane dropped four bombs on Mariupol.

NUJU President Sergiy Tomilenko said: “At the moment we are working 24/7 to evacuate journalists from war zones. We have to respond to a large number of urgent requests.”

NUJU is trying to get in touch with other colleagues and their relatives. Due to the lack of electricity, communications and internet, civilians are completely isolated. They are not always aware of the humanitarian evacuation corridors. Information about the evacuation is passed on by word of mouth.

NUJU estimates that about 50 journalists and media workers have been able to leave Mariupol and be rescued in the last few weeks. At least another 50 journalists currently remain hostage in the Mariupol blockade.

“New war crimes in Mariupol must be avoided at all costs,” said the EFJ GS Ricardo Gutiérrez. “We call on the international community to do everything possible to allow the evacuation of the thousands of civilians and dozens of journalists who are trapped in this large port city.”