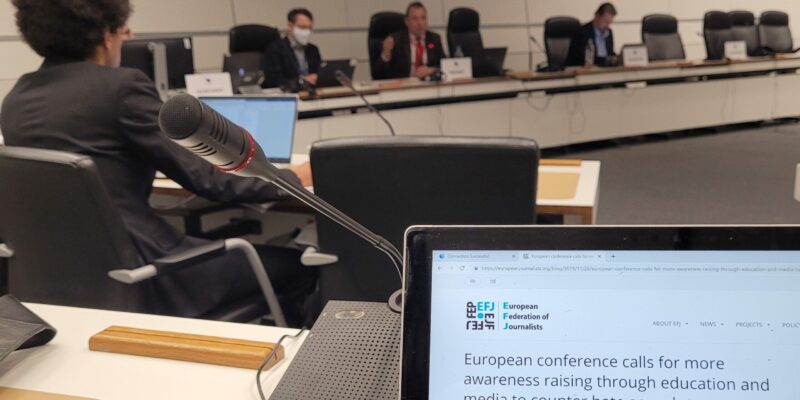 The European Commission presented, in December 2021, an initiative to extend the list of EU Crimes to hate speech and hate crime. The European Federation of Journalists (EFJ) called on the EU to carry out this reform while preserving freedom of expression and editorial independence, at a hearing held today by the European Economic and Social Committee (EESC).

The proposed inclusion of hate speech and hate crime into the list of EU crimes will allow for harmonisation of criminal offenses ans sanctions at EU level. This initiative is part of the EU’s response to extremist ideologies online and more specifically to the proliferation of racist and xenophobic hate speech on the internet. The new rules would also enable the Commission to put forward laws to punish misoginy and anti-LGBTQ+ abuse online and offline.

Speaking at a hearing organised by EESC, EFJ General Secretary Ricardo Gutiérrez said that the EFJ is also very concerned about the proliferation of hate speech, particularly on social networks. “Journalists, especially women journalists, have become prime targets. The Council of Europe’s 2022 Report on the Protection of Journalism, which will be published at the end of April, shows that the number of physical attacks against journalists in Europe has increased by more than 50% in one year. Many of these attacks have occurred during coverage of protests and in most cases journalists have faced a wave of media bashing and an avalanche of online hate speech, including hate speech by senior politicians, leaders of political parties and heads of governments”.

The EFJ GS recalled the position of the four international Special Rapporteurs on freedom of expression: in October 2021, they issued a Joint Declaration on Politicians, Public Officials and Freedom of Expression, expressing their growing concerns about intolerant and divisive public communication by politicians and public figures.

Ricardo Gutiérrez pointed out the important role of independent press councils in the fight against hate speech, by promoting professional ethics in a self-regulatory framework involving civil society, without government interference.

“The role of an independent and pluralistic media is also very important,” added Ricardo Gutiérrez “Any measures to tackle hate speech which are directed at the media should respect editorial independence and media plurality. Any form of media regulation should be undertaken by bodies independent of political influence, which are publicly accountable and operate in a fully transparent way.”

“The challenge in a democracy is to combat hate speech while preserving freedom of expression,” said the EFJ GS. “There is hate speech that must be prohibited. There is hate speech that may be prohibited. But there is also lawful hate speech. The case law of the European court of Human rights protects expression that is offensive, disturbing or shocking. The European Freedom of Expression standards do not permit limitations premised solely on the basis of “offense” caused to an individual or group.”

Ricardo Gutiérrez called on stakeholders to do more than just take punitive measures. “States have the responsibility to create an enabling environment for the rights to freedom of expression, equality and non-discrimination. Governments can take positive policy measures to tackle discrimination, to address the root causes driving hate. That is also our moral and social responsibility, as journalists: we should undertake voluntary initiatives to tackle the root causes of intolerance to contest hate speech.”