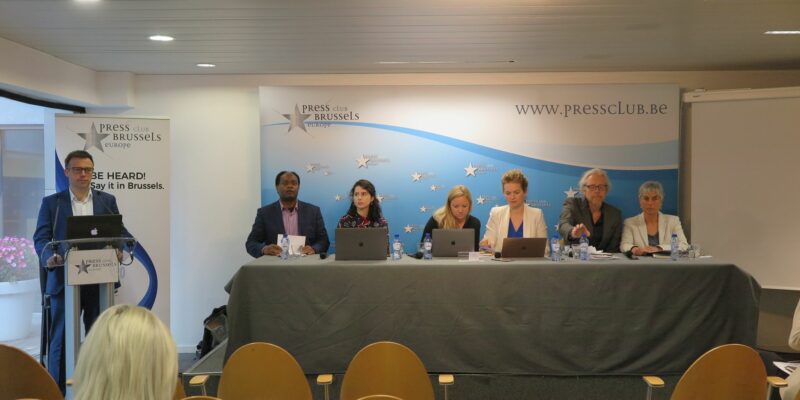 On Wednesday 27 April 2022, the Council of Europe Platform to Promote the Protection of Journalism and the Safety of Journalists, together with the European and International Federations of Journalists (EFJ and IFJ) and other partner organisations, launched the 2021 report “Defending Press Freedom in Times of Tension and Conflict” at the Brussels Press Club in Belgium.  The report lists the alerts posted by journalists an press freedom organisations on , provides legislative and political context and identifies the measures needed to improve the effective protection of journalists.

The report indicates that “red lights are flashing”. In 2021, 282 alerts from 35 countries were submitted to the CoE monitoring platform, compared to 200 in 2020, an increase of 41%. Six journalists have been killed in Europe in 2021 in the course of their work, including four who were deliberately targeted.

Some of these alerts may reflect recurrent failures in so-called “imperfect democracies”, the report says. Others are in response to measures taken to combat the Covid-19 pandemic and are supposedly transitory.

In terms of online abuse, the report states that a total of 110 alerts of harassment and intimidation of journalists were published on the Platform in 2021, compared to 70 in 2020. The highest number of cases were recorded in Poland, the Russian Federation, Serbia, Slovenia and the United Kingdom.In particular, concerns over gender based abuses online, for which social media platforms should take more responsibility by enforcing hate speech standards to ensure a healthy and democratic debate online as well as offline.

The report also suggests recommendations to adopt in the future to improve journalists’ safety. In particular, it calls on governments and civil societies stakeholders to ensure every alert is replied and followed with the necessary actions. Moreover, the Council of Europe partners call for  concrete action to protect journalists covering public events, ensure public service media independence and introduce measures against SLAPPs by offering adequate financial and legal resources to the threatened media workers.

The report adds an analysis of the impact of the invasion of Ukraine on press freedom. Attacks on the media and the press have resulted in widespread draconian censorship, not only of Russian media, but also of foreign media. The report points in particular at Russian media regulator Roskomnadzor, which demanded media outlets only publish official government reports on the invasion of Ukraine and the course of the war, and threatened to block them and their websites if they failed to do so.

Ricardo Gutiérrez, EFJ General Secretary said: “The safety of journalists is seriously deteriorating in Europe. There were six journalists killed on assignment in 2021. Three times more than in 2020. And already 11 have been killed this year. The number of cases of attacks on the physical integrity of journalists has increased by 60% in one year. States cannot be complicit in this situation by remaining passive. We expect governments to take the necessary protective measures by implementing the measures set out in the Council of Europe’s Recommendation 2016/4 on the Protection of Journalism and the Safety of Journalists. All governments signed this commitment in 2016, but almost none of them have put it into practice. The hypocrisy must stop. If states really want to guarantee press freedom, there are plenty of concrete measures that need to be implemented. The real question is: why don’t governments do what is necessary to better protect journalists? Why are they afraid to give proper protection to the watchdogs of democracy?”

Ernest Segaga, IFJ head of Human Rights and Safety said: “Journalism is based on the quality of objective information but unfortunately misinformation does not come from the traditional media. The way to fight misinformation is in one hand for publishers, whether they are traditional media or social media platforms, to take due care and make sure that the content that is posted on the platforms is actually accurate, but also for consumers to seek out the right sources of information to be informed.”