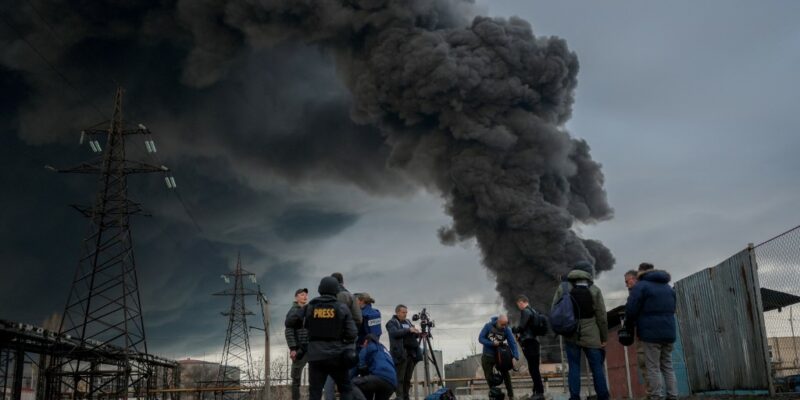 On World Press Freedom Day (WPFD) on Tuesday 3 May, the European Federation of Journalists (EFJ) has stressed the need for concrete actions from European governments to defend and protect media freedom. 85 journalists are currently in prison in Europe, just for doing their job. And 44 journalists have been killed in Europe since 2015. The EFJ calls on states to fulfil their commitments and obligations to protect journalists and media independence and pluralism. The EFJ also joined the International Federation of Journalists (IFJ) to combat journalists’ surveillance.

Cases of spying on journalists and media workers using sophisticated spyware programs have multiplied in recent years all over the world. To mark World Press Freedom Day, IFJ and EFJ and all their affiliates urge governments and international bodies to work together with journalists’ unions and associations to develop strict regulations that ban surveillance of journalists and recognise the inviolability of journalists’ communications.

In recent months, media organizations and international bodies have reported multiple cases of espionage on media professionals. In July 2021, the Forbidden Stories project revealed that 180 journalists’ smartphones were infected with Pegasus spyware all over the world, including in Hungary, Belgium, Azerbaijan and France. The same organization revealed that Greek journalist Thanasis Koukakis was allegedly spied on by a new surveillance software named Predator for at least three months, between 12 July and 24 September 2021, while another investigation has recently exposed alleged espionage on Catalan journalists in Spain.

The IFJ and EFJ call on governments to enshrine in domestic law the inviolability of journalists’ communications both abstractly and in the framing of specific laws and regulations such as those on domestic surveillance. We call on the international community to build a regulatory regime that allows the inspection and regulation of all organisations supplying products that have the capacity to undermine journalists’ fundamental rights and freedoms.

In addition to this context of abusive surveillance, the recent report by the Council of Europe’s Platform for the Protection of Journalism shows a worrying deterioration in the working conditions of journalists across Europe: 282 serious press freedom violations were recorded in 35 member states of the Council of Europe in 2021. Six journalists lost their lives last year in Europe. And 11 more have already been killed in the first four months of 2022, in Ukraine and Turkey.

The EFJ welcomes Council of Europe Human Rights Commissioner Dunja Mijatovic‘s call to reinforce the safety of journalists covering conflicts. “In armed conflicts, journalists are often subject to deliberate attacks, kidnapping and torture. The lack of effective investigations and prosecutions of those responsible for crimes against journalists creates a state of impunity which cannot but foster further violence. Covering armed conflicts is dangerous work, and even more so when the states involved do not fully abide by the norms and standards by which they are bound. This not only endangers the lives of journalists, it also prevents them from providing reliable and timely information on issues of public concern, thus undermining people’s right to information. We cannot allow this to continue,” said Dunja Mijatovic.

“Another crucial step is for all governments, including those which are not directly involved in the conflict, to co-operate with journalists, their employers, unions and associations. (…) States could support initiatives of journalists’ associations and media organisations, for example those aimed at collecting and distributing protective gear. (…) Such co-operation should also aim at improving communication with the relevant military and civilian authorities. These authorities should provide journalists with regular information about the conflict, the security measures that should be taken and guarantee freedom of movement and access to information to journalists. In addition, states should facilitate and support combat and first aid training. (…) Lastly, respecting the confidentiality of journalistic sources is a key component of upholding press freedom and helping journalists exercise their profession more safely, including in armed conflicts. (…) All these measures are within reach if there is political will. While states cannot prevent all dangers that journalists may face in the battlefield, they have legal, financial and other means to reinforce journalists’ safety. They should make better use of them.”

“I can only agree with Ms. Mijatovic’s appeal,” the EFJ President Mogens Blicher Bjerregård insisted. “It is clear that governments have the power and capacity to improve the working conditions and safety of journalists. The situation is deteriorating and we do not see governments taking the necessary measures, disregarding the right of citizens to access information.”

Journalists covering conflicts are #NotATarget. @coe states should do more to #ProtectJournalists, reinforce their safety and ensure #PressFreedom.

📢#WPFD2022: On World Press Freedom Day we demand strict regulations that prohibit the surveillance of #journalists and recognise the inviolability of their communications. https://t.co/d55SHBP7Yl pic.twitter.com/8U9YTfphI7