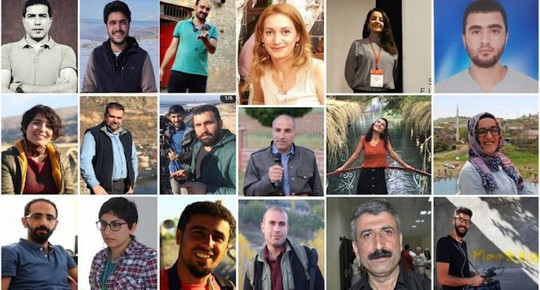 
A Turkish court imprisoned pending trial 16 Kurdish journalists and media workers for allegedly “spreading terrorist propaganda” on 16 June 2022. The European and International Federation of Journalists (EFJ-IFJ) and their four Turkish affiliates strongly condemn these massive arrests of journalists on groundless charges and urge for the immediate release of all of them.

Last week, Turkish police detained 21 Kurdish journalists and media workers in a massive operation in the Kurdish-majority southeastern province of Diyarbakir on terrorism charges. Police raided the homes of several Kurdish journalists working for the pro-Kurdish Mezopotamya News Agency, the all-female Jin News website, a production company called Pel, and the Dicle Firat Journalists’ Association. Police officers seized computers, hard drives and other work equipment from the journalists’ houses and media offices. Among the 21 detained journalists, five of them were released under judicial supervision yesterday.

Authorities declined to comment on the legal reason for arrests, as the investigation was officially declared classified. Citing anonymous police sources, media reported that the journalists were arrested over “spreading terrorist propaganda” in connection with a TV broadcast from Belgium and the UK, which authorities labeled as terrorist organisation propaganda.

“Today is one of the darkest days for press freedom in Turkey’s history. Authorities continue to crack down on journalists, accusing them of terrorism. We stand in solidarity with all Kurdish media workers currently in prison for doing their job and urge for the immediate release of all of them.”

The massive arrests comes a few weeks after the governing alliance of Justice and Development Party (AKP) and Nationalist Movement Party (MHP) submitted to the Parliament a bill on ‘disinformation and fake news’. If passed, it will lead to further restrictions on freedom of expression by punishing those convicted of deliberately publishing “disinformation and fake news” with up to three years in prison.

EFJ General Secretary Ricardo Gutiérrez condemned the latest attempts to muzzle the press: “European journalists who met in Izmir earlier this week expressed their full solidarity with jailed and prosecuted journalists in Turkey. Your struggle is our struggle and together we can resist censorship and repression.”

Today, 39 journalists are behind bars for doing their job, according to the Journalists’ Union of Turkey.