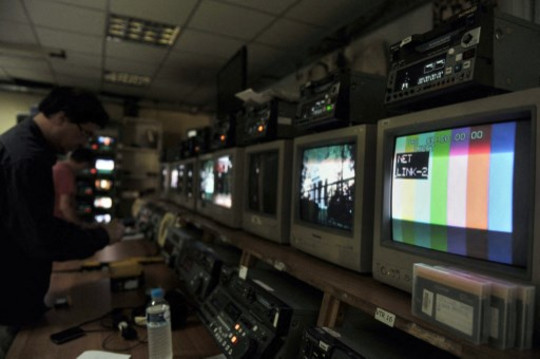 A technician works in an editing room at the headquarters of a TV station in Athens. Louisa Gouliamaki / AFP

Article 29 of the new bill provides that licensed national television channels, while receiving a licence on the condition to directly employ 400 media workers, could end up employing 240 journalists, and hire the remaining 40% through affiliated and production companies. The new regulation arrives just 18 months after the last legislative reform, which cut 15% of the staff in television stations.

The new bill was submitted by the Government for consultation on 1 September.

On 5 September, the Boards of Directors of Greek unions and federations, including the four IFJ-EFJ affiliates, sent a letter to Prime Minister Kyriakos Mitsotakis requesting the withdrawal of article 29 from the bill.

In a joint statement, the Greek unions declared that “the reduction of the staff with the simultaneous increase in the percentage of casualised workers will harm the work achievements of our colleagues and will increase the job insecurity that has already existed in recent years after the licensing process of the channels.”

The IFJ and the EFJ said: “We call on the Greek government to withdraw article 29 of the new regulation, which undermines worker’s rights and fosters precariousness, while compromising the quality of information. Journalists and unions in Greece have been fighting for the fundamental right to decent work and dignity for many years. It is time for the authorities to safeguard the rights of journalists and to ensure decent working.”