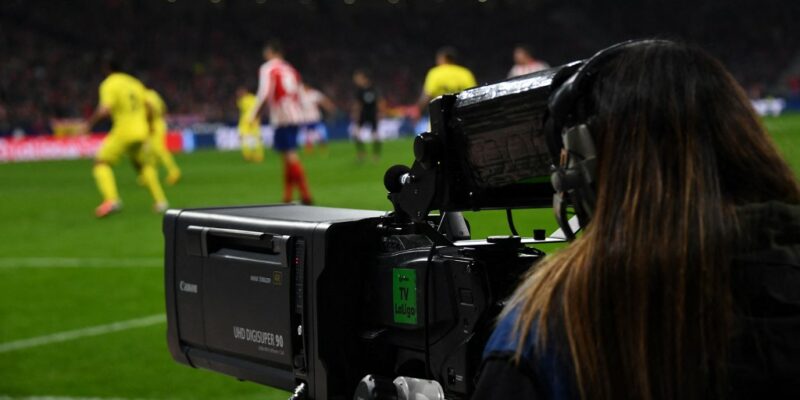 The Spanish football authorities have introduced new conditions for the broadcasting of its matches, including a ban on journalists asking uncomfortable questions to footballers and managers, under threat of being removed from their jobs. The International and European Federation of Journalists (IFJ-EFJ) and its Spanish affiliates have expressed their concern about the new criteria, which undermine media freedom and the public’s right to information.

La Liga de Fútbol, the association that organises the first and second divisions of the men’s football competition in Spain, has introduced changes to the rules for broadcasting matches for the 2022-2023 season. In the specifications for the broadcasting rights, the association stipulates that “the winning bidder will undertake that the personalisation of the production will be carried out in a positive way, avoiding damaging the image of the competitions, clubs, players, coaches and public.”

Although the president of La Liga, Javier Tebas, has insisted that this is an ‘editorial line’, the ban on asking uncomfortable questions to footballers and managers, under threat of being removed from their jobs, infringes freedom of the press and the public’s right to information.

The Federation of Spanish Journalists’ Associations (FAPE) has issued a statement rejecting attempts by any media company, whether political, economic, sporting or otherwise, to force journalists to produce and communicate content suited to their commercial interests:

The Federation of Citizen’s Services of Comissiones Obreras (FSC-CCOO) declared: “It is unacceptable that Mr. Tebas pretends that the information on Spanish football should be subordinated to his particular interests […] Spain is a democratic country in which the 1978 Constitution guarantees the right to information, so we ask that the Spanish football bosses be forced to comply with article 20. Otherwise, action must be taken against this serious precedent against a fundamental right such as the right to information.”

In a statement, The Federation of Journalists’ Trade unions (FeSP) recalled that having one’s own editorial line does not legitimise manipulating reality or censoring the journalistic content that depends on it. FeSP demanded that La Liga scrupulously respect the public’s right to information and stop putting conditions on journalistic content.

The Association of Journalists in Spain (UGT) expressed its rejection of the new criteria imposed by the professional football league, since any “editorial line” can prevent the free exercise of the journalistic profession in a democratic state. “La Liga’s stance, which includes the threat of dismissal for journalists who ask ‘uncomfortable’ questions, is intolerable,” it added.

In a joint statement, the International and European Federation of Journalists (IFJ-EFJ) backed their Spanish affiliates’ demands and called on La Liga to respect media freedom and the public’s right to information. “Journalists must carry out their duty to inform freely and without coercion,” they said.