Malta: Government must widen its consultation on media law reform 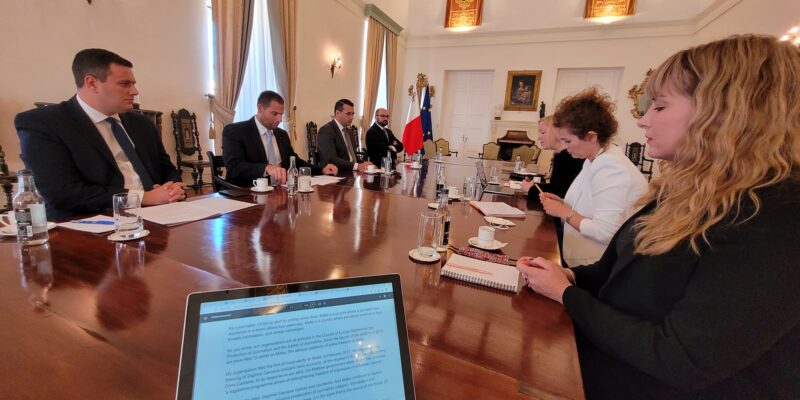 In a meeting with our representatives in October 2021 in Valletta, Prime Minister Robert Abela reaffirmed his commitment to ensuring the safety of journalists. Credit: Ricardo Gutiérrez / EFJ.

A number of journalists and civil society groups have urged the Maltese government to launch a public consultation on the media law reform. The International and European Federations of Journalists (IFJ-EFJ) join their affiliate the Institute of Maltese Journalists (IGM) in urging the government to be transparent in the drafting process and openly consult the public before submitting any bill to parliament.

A committee of experts, of which IGM is a member, was appointed by the Maltese government and concluded the first part of its remit on 1 June. Its role consisted in providing feedback to a number of laws passed by the government dealing with greater protection of journalists and strengthening journalism. The IGM claims it has pushed for more robust anti-SLAPP legislation and the entrenchment of the media as fourth estate in the Constitution, among others. The recommendations of the group of experts have never been made public despite the insistence of the IGM.

In a letter addressed to civil society groups and journalists on 19 September, the IGM regrets the government has not made public the Committee of experts’ recommendations. “The IGM position has always been that the the government should publish the report without delay. The government has failed to do so,” said IGM which, as a Committee of expert member, is bound by confidentiality. IGM council also wrote to the Justice Minister reiterating its request for immediate publication.

The second part of the Committee of experts’ remit will focus on various aspects related to the Daphne Caruana Galizia public inquiry. The IGM demands that the expert committee hold “active consultation sessions with the industry stakeholders prior to issuing a set of proposals”.

A letter signed by a number of journalists, IGM representatives, broadcasters, academic and civil society groups was sent to the Prime Minister on 22 September asking for an open consultation. “We do no understand how press freedom can be safeguarded by laws that are drafted in secret”, they said.

These demands come in the context of the publication in July this year of an independent inquiry into the murder of journalist Daphne Caruana Galizia on 16 October 2017. The inquiry found that the Maltese state bears responsibility for creating a culture of impunity as it failed to take action in protecting the journalist.

“No proposal on media legislative reform should be submitted to the parliament without a transparent public consultation. This is all the more crucial in a country where a state holds some form of responsibility for the killing of a journalist, ” said IFJ and EFJ.