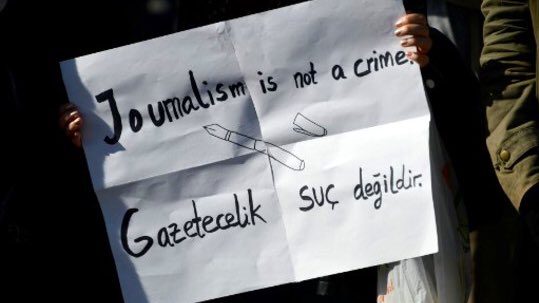 On 25 October 2022, eleven journalists were arrested following raids on their homes in the cities of Ankara, Istanbul, Van, Diyarbakir, Urfa and Mardin in Turkey. The International and European Federations of Journalists (IFJ/EFJ) join their affiliates, the Journalists Union of Turkey (TGS) and the Press Labour Union (DİSK Basın-İş) in urging the authorities to immediately release the detained journalists and stop the raids on their homes.

According to IFJ and EFJ affiliates, Turkish authorities raided the homes of 10 journalists as part of “terrorism-related” investigations led by the Ankara Chief Public Prosecutor’s Office. According to DISK, the journalists were flown to the floor head down, handcuffed with weapons pointed at them.

Premises of the two pro-Kurdish media outlets were searched and the alleged relations of these journalists with outlawed Kurdish militants supposedly led to their arrests. Journalists of Mesopotamia Agency and JINNEWS were targeted, both pro-Kurdish media newsrooms.

A 24-hour restriction order was issued against the detained journalists. Restrictions on lawyers have been imposed and journalists’ offices are also being sought.

The arrested journalists are:

“We are concerned that this number will increase. Journalism is not a crime. We appeal to our colleagues and the whole community. Don’t be silent against pressure. If you keep quiet, one day it will be your turn”, said DİSK Basın-İş.

According to the Mezopotamya, over 100 books but also, computers, newspapers, Kurdish magazines and ID cards were confiscated by the police.

TGS said: “These operations are an attack on the citizen’s right to be informed. We want our colleagues to be released as soon as possible. Journalists cannot go to the elections by being detained! You will not be able to criminalise journalism with these applications!”

Turkey’s parliament passed on 13 October a highly criticised law that could see reporters and social media users jailed for up to three years. The law criminalises free flow of information by providing a framework for extensive censorship of online information. Journalists found guilty of deliberately publishing “disinformation and fake news” could face up to three 3 years in prison. This enables the government to further subdue and control public debate in the lead up to Turkey’s general elections in 2023.

“We are highly concerned by this new development just a few weeks after the adoption of the new Disinformation law. We call for the immediate release of the journalists and urge the authorities to stop the crackdown on our journalists colleagues”, said the International and European Federations of Journalists.