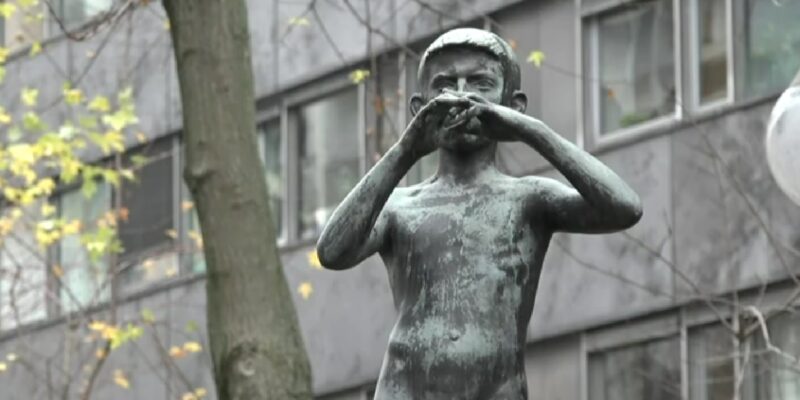 Picture Credits: IPI (The statue outside the headquarters of RTV SLO)


The European Federation of Journalists (EFJ), together with other international media freedom and journalists’ organisations, today outlined their tentative support for reform of the law on Radiotelevizija Slovenija (RTV SLO) and the urgent need to depoliticise the public service media and their oversight bodies amidst continued threats to their independence.

The undersigned organisations welcome the initiative of the new coalition government to reduce the influence of politics on the broadcaster’s operations and foster an enabling climate for its public service mission.

Events of the last few years at RTV SLO have provided a clear illustration of why such changes are urgently needed. Under the previous government, leading politicians created an atmosphere of hostility towards public service media, including smears against journalists and aggressive accusations of political bias, as reflected by the 2021 mission report of the undersigned organizations and Slovenia’s fall to 54th place in Reporters Without Borders’ 2022 World Press Freedom Index. This was accompanied by politicised appointments to RTV SLO’s programming council and supervisory board, on occasion through legal yet questionable practices. Politically-affiliated appointees to these two bodies then utilised voting majorities to approve controversial decisions on staffing and programming favourable to the ruling SDS party, particularly at the public television. These appointments of often unqualified candidates or individuals with links to the former government were pushed through despite the widespread criticism.

Since then, directors and management have been accused by staff of axing shows, removing editors, pressuring or reassigning journalists, and attempting to engineer a political shift in news and current affairs programming. Unions representing RTV SLO have repeatedly undertaken strike action to protest what they claim are unjustified infringements on editorial freedom, while repeated calls have been made by the largest journalist unions for the director general and director of television to step down. These near daily internal clashes, which have intensified in recent months, have led to more than 30 staff quitting and resulted in a damaging drop in viewership and a loss of public trust. Recently, 38 members of staff received warnings about the potential termination of their employment due to their public support for colleagues in the studio. Negotiations to resolve the situation remain unsuccessful. This situation jeopardises RTV SLO’s journalistic mission and undermines the public’s right to information.

It is clear to our organisations that efforts are urgently needed to address the root cause of these issues: the disproportionate influence of all forms of politics on RTV SLO’s governance structures. While previous governments have pledged to amend the 2006 law on RTV Slovenija to reduce political representation on the councils, proposals have always fallen away when reality of governing set in. This lack of political will to address the situation has left the RTV SLO at the mercy of political forces and open to successive periods of instability after election cycles. While concerns over independence in management are nothing new, the changes enacted under the previous government have left the broadcaster in the most challenging situation in decades. We therefore welcome the legislative initiative by the new coalition government led by Prime Minister Robert Golob to address this extraordinary situation.

The draft proposals would restructure the two current governing councils into a single, 17-member decision-making body. Appointments to this new Council of RTV would be made by representatives of civil society and RTV SLO employees. The National Assembly, which currently appoints the majority of members, would play no role. Under the reorganised system, the council would be led by a four-member management board, headed by a president, which would oversee financing and programming. Appointments would be made in a staggered manner. If the changes are approved, the mandate of the current members of the current program and supervisory councils, director general director, director of television, and director of the radio would end, though they would continue in their position until the new council is established. Current editors would remain in their posts, except in cases where it is determined that they do not enjoy the confidence of the majority of employees in their editorial team.

Our shared assessment is that overall these draft amendments represent a justified and principled attempt to revise an outdated legislative framework, depoliticise the broadcaster and foster a more enabling environment for the free exercise of RTV SLO’s journalistic mission. If approved, the new system of governance would significantly limit the ability of any government, current or future, to use its parliamentary majority to fill the councils with allies and interfere in the work of public media. The management model outlined is representative and would reflect a broad range of civil society groups.

However, we note that it is regrettable that the Parliamentary Committee for Culture did not first hold a public consultation on the bill or seek review of the draft from the Council of Europe or international media organisations and journalists’ organisations/unions. While we recognise the need to urgently address the situation at RTV SLO, such changes to the legal framework should have been developed in an open and transparent manner and with the full involvement of civil society and journalist organisations. To ensure full functional independence of this new council, it is vital that all candidates meet strict professional criteria, be selected under clear and transparent rules and be committed to ensuring pluralistic and professional programming. Candidates from civil society should not have any direct or indirect links to political parties. It is vital also that the new financial committee will fully operate in the public interest. Questions also remain about the management of the RTV SLO during the transition period. Nonetheless, in our assessment the draft amendments align with European standards on public service media governance and should have an overall positive impact.

The law was adopted by the National Assembly on 14 July 2022. Before any changes are made, the amendment will face a referendum initiated by the opposition on November 27. If passed, this should ensure the stability of RTV SLO in the short term. Even then, it must not be seen as an antidote to all the challenges currently facing public service media. The process of depoliticisation will be long and challenging. It is crucial also that this legislation be accompanied by a secondary bill which provides for long-term sustainable financing and establishes a solid economic foundation for RTV SLO to hire and train a new generation of professional journalists, re-establish public trust and meet the challenges of the future. This accompanying bill must follow quickly and should establish autonomy in editorial decision-making and modernise the organisation of the institution.

This reform is an important first step forward. If passed, this legislative amendment would move towards fulfilling a key recommendation of the European Commission’s Rule of Law report 2022 on Slovenia, which called for stronger mechanisms to enhance independent governance at public service media. Applying these standards would likewise represent a boost for the media freedom credentials of the new government, which made reform of public service media a priority during its election campaign. Our organisations will continue to closely monitor the situation and call for an end to all politically-motivated pressure on the editorial autonomy of the country’s public service media.