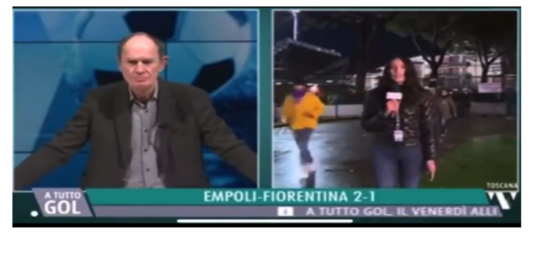 Football supporter Andrea Serrani, has been sentenced to 18 months in jail, suspended for five years, and ordered to pay 10,000 euros for groping television journalist Greta Beccaglia as she reported live after a football match in 2021. The International Federation of Journalists (IFJ) and the European Federation of Journalists (EFJ) join their affiliate, the Federazione Nazionale Stampa Italiana (FNSI), in welcoming the court’s decision and warning against any further attempt of sexual assault against media professionals.

On 27 November 2021, Toscana TV journalist, Greta Beccaglia, was groped by Serrani while reporting live from the Empoli vs Fiorentina game in Empoli. Beccaglia was interviewing fans exiting the stadium live to air as Serrani approached her and slapped her on the backside, which Greta answered “Sorry, you can’t do this”. As the incident happened on live TV, the recording went viral.

Directly after the incident, the IFJ, EFJ and FNSI called for justice and condemned the act of physical harassment against Beccaglia, which occurred two days after the International Day for the Elimination of Violence against Women.

On December 20, 2022, Andrea Serrani was sentenced to one year and 6 months suspended imprisonment in addition to the payment of legal costs and compensation for moral and material damages by a Tribunal in Florence. Serrani was ordered to pay 10,000 euros to Beccaglia and follow specific courses provided by support organisations on prevention, psychological assistance and recovery to subjects convicted of sexual violence.

Serrani will also pay the civil parties, including the FNSI and the “Cnog” (Consiglio nazionale dell’Ordine dei giornalisti), 5,000 euros each.

The FNSI declared “We are very thankful for all press associations who made it possible to help their colleague go to Court and file a complaint.” It concluded with “We invite all our colleagues to always denounce any attempt of intimidation, threat or aggression because each of these episodes is an attack not only on an individual level but against all journalists.”

IFJ and EFJ Secretary Generals, Anthony Bellanger and Ricardo Guterrez, said “We renew our commitment to journalist Greta Beccaglia, who suffered an unacceptable act of sexual harassment while doing her job. We welcome the court’s decision and are hoping that this sentence will prevent further sexual assaults against journalists. However, the situation for thousands of journalists, especially women, is still very insecure and we urge the media to develop robust policies to properly address violence at work and adopt a zero-tolerance approach towards gender-based violence.”