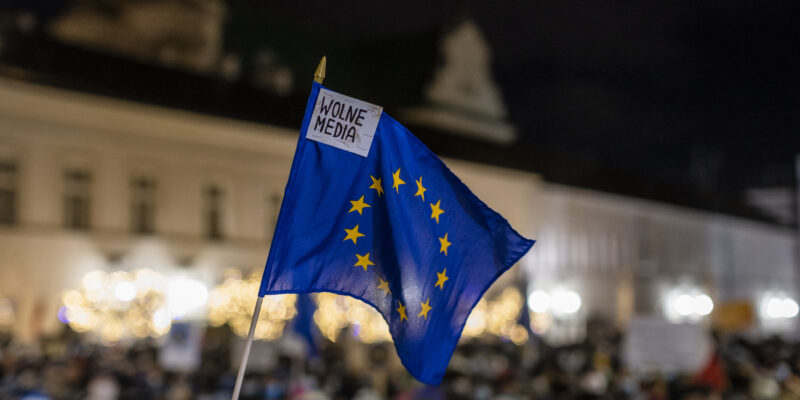 Media outlets across Poland united in a strong act of solidarity when the National Broadcasting Council (KRRiT) decided to launch legal proceedings against TVN for “promoting false information” over a report critical of the Smoleńsk committee. The report, published on Monday 12 September, was made free of charge by the broadcaster TVN. Media outlets Gazeta Wyborcza, Newsweek Polska, Rzeczpospolita, radio stations Radio Zet, Tok FM, and RMF, news websites Onet, OKO.press and Wirtuala were amongst the dozens of editorial offices that published the documentary. The European Federation of Journalists (EFJ) and its Polish affiliate the Society of Journalists (TD) welcomes this show of support amongst concurrent media and ask KRRiT to review its decision.

The report, Siła Kłamstwa (“The Power of Lies”), a 77-minute documentary by Piotr Świerczek, explores the government and the subcommittee’s actions about the Smoleńsk air crash, and how information of public interest were kept hidden. It shows that the subcommittee, created in 2015 to investigate the Smoleńsk plane crash of 2010, deliberately kept evidence that the crash was an accident and not, as the government committee argued, a plane crash instigated by the Russian’s authorities. The report includes evidence based on the results from a US-based laboratory findings, showing the crash was due to a pilot’s error, as the previous investigation decided by now opposition leader Donald Tusk found.

The documentary questions the reliability of the subcommittee led by Antoni Macierewicz and the information given by the current ruling party, Law and Justice (PiS), led by Andrzej Duda. In the crash, brother of PiS’s chairman Jarosław Kaczyński and then-President Lech Kaczyński, and 95 political figures, military commanders, clergy, intelligentsia and state officials found death while on their way to Smoleńsk airbase in Western Russia.

On 30 December 2022, after a complaint filed by Macierewicz, the broadcasting council KRRiT (widely seen as close to the party in power) announced it was launching legal procedures against TVN. The channel risks not only an important fine, but losing its broadcasting license for the second time in just over a year. The announcement of the National Broadcasting Council stated that “the proceedings will concern in particular whether the programme broadcasted on TVN24 and TVN contains content that violates Article 18(1) and (3) of the Act of December 29, 1992 on Broadcasting and Television. The Chairman of the National Broadcasting Council will also investigate to what extent the possible dissemination of untrue and unreliable information violates the terms of the concession granted to TVN SA to broadcast the program under the name of TVN”.

TVN received an official letter from KRRiT, informing the channel that the Council’s chairman initiated ex officio proceedings on the grounds of misinformation and “threatening public security” and accusing TVN of “unreliability and non-objectivity”. No evidence has been given to support those accusations.

“It is amazing that the Polish authorities have chosen the issue of the Smolensk air crash for their first clash with our free media. After all it has been clear for many years that the crash was an accident and not an explosion as they continue to repeat. This just proves how important free media are and how crucial it is that the truth be defended,” says Krzysztof Bobiński, board member Society of Journalists, Warsaw.”

This investigation is another development in the clash between independent media outlets and the government in Poland, that follows the street protests of 2021 as a reaction to a controversial media ownership bill which would have, if transformed into law, forced TVN owners to sell their majority shares, and the following play in which KRRiT continuously delayed its decision to renew the channel’s broadcasting license.