Stand Up for Journalism – #SUFJ

For the 7th time, the EFJ will be marking 5 November as a day to “Stand Up For Journalism”, and we are asking our affiliates across Europe to join in the campaign. On the day or during the week of the 5 November, journalists across Europe and around the world come together in solidarity to spotlight some of the major challenges they face.

The EFJ Steering Committee is proposing to use the day to highlight the situation of journalists in an increasingly concentrated media environment. New actors including Google threaten not only media pluralism but increasingly the survival of many freelance journalists who often only face one media employer, especially at local level. Tycons have been buying media outlets and in many countries appear to exert media control. In virtually every country in eastern and southeast Europe, those involved in media are also involved in other businesses. All of them influence editorial control or promote a political ideology.
Unions in Europe and around the world can launch initiatives or highlight a campaign in their countries as part of a European-wide week focusing on issues concerning journalists, including:

Industrial action such as workplace union meetings on the day/in that week or marches in the street;
Press conferences on a special theme related to our campaign on media concentration, press freedom and journalism as a public good;
Public meetings; petitions and letters to politicians and public supporters on specific issues;
Mass grievances at work where everyone puts in official complaints about problems facing journalists (the job crisis, wages, working hours and conditions);
Short work break for the defense of quality in journalism and ethical media.

For the campaign to be as successful as the last year s and stand to its promises we need your full support and creative ideas! Please send all information about your activities to efj(at)ifj(dot)org.

What can you do?

We call on the EFJ affiliates to join our action day by launching initiatives or highlighting a campaign in their countries as part of a European-wide week focusing on issues concerning journalists, including

We have prepared a campaign video that you can share on your website and social media sites about the impact of media concentration in Europe. 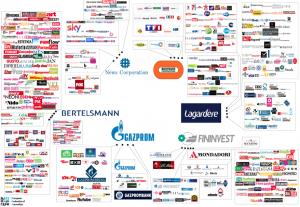 You can use the hashtag #SUFJ on social media sites to spread the campaign and highlight your own actions.

Last but not least, remember to share your activities with us. Send your action and pictures to efj.trainee@ifj.org, so that we can publicise them and share it with others.

Action across Europe from our members BAJ, Belarusian Association of Journalists set up a “Stand up for Journalism campaign online and offline to stand up for the rights of persecuted journalists. The idea was to put participant in the persecuted journalist’s shoes, by taking a picture of himself in the image of the imprisoned media worker, who “printed articles on foreign Web-sites”, “appeared on foreign TV and radio”, and got punished for that. (More pictures on BAJ website) More than two hundred union leaders and activists took part on the First South Russia Forum for Unions of Creative Workers, in Stavropoll, on 3-5th November. Journalists’ gathered in North Caucasus State University, Faculty of Journalism, for open discussion on Stand Up for Journalism Campaign and EFJ Strategies for Journalism as Public Good. Speakers talked about EFJ programs and RUJ efforts to protect workers’ rights, solidarity and combating hate speech, and recent efforts and achievements of Russian- Ukrainian unions’ dialogue under IFJ, EFJ and OSCE umbrella. NUJ, National Union of Journalist, organise a conference about democracy and ownership in the age of big media and internet titans. This event is set up with in association with the Cardiff University and Campaign for Press and Broadcasting Freedom. (More in English)

NUJ also joined the petition “Save our sources” which demand the Regulation of Investigatory Powers Act not to be used by public authorities to secretly obtain journalists’ phone records and identify confidential sources. The petition was delivered to the Interception of Communications Commissioner’s Office on 5th of November. SNJ, Syndicat national des journalistes (National Union of Journalists), and SNJ-CGT, Syndicat national des journalistes de la CGT (CGT National Union of Journalists), sent a joint open letter to the President of the Republic, asking him to urge deputy from the National Assembly to approve an important bill about journalist rights. This draft law was introduced a few months before, with the help of different media expert, to complement the old law on press freedom. This proposition was sent under the government of Nicolas Sarkozy, the former president. Since, the law is frozen. (Read the letter in FNSI, Federazione Nationale della Stampa Italiana (National Federation of the Italian Press), hosted a discussion about “Combining work with rights and dignity”. The initiative was attended by Franco Siddi, senior management over the FNSI and John Rossi, president of the Labour Commission Chamber. (More in Italian) FeSP, Federacion de Sindicatos de Periodistas (Federation of Journalist Union), ask the Government and the parliamentary groups to promote urgent legislation on media concentration in accordance with a modern democracy. (More in Spanish)

El Sector de Medios de Comunicación de la FSC-CCOO,  (The Media Sector of Trade Union FSC-CCOO) organised a Day for the Defense of Public Broadcasting. This event gathered journalists, media workers, deputies from every Spanish party (except PP) and university teachers. Ricardo Guitterèz, general secretary of the EFJ, was invited to speak about the changes in public media. This study day lead to the conclusion that Spain, as many European countries, is facing real losses in public broadcasting. In opposite, private broadcasting is getting back higher percentage of the market, 85% when public broadcasting is left with only 15%. Against this weakening and this loss of influence, what is the solution? (More in spanish)

dju in ver.di, Deutsche Journalistinnen- und Journalisten-Union (German Journalists Union) is co-organising of a few round-tables on 5 November on issues of concern to journalism including a discussion about reporting on migration without discrimination. (More in German)

DJV, Deutscher Journalisten-Verband (German Journalists’ Association), is calling for a moment of silence in memory of the killed journalists around the globe on 5 November at 12 am. (More in German)