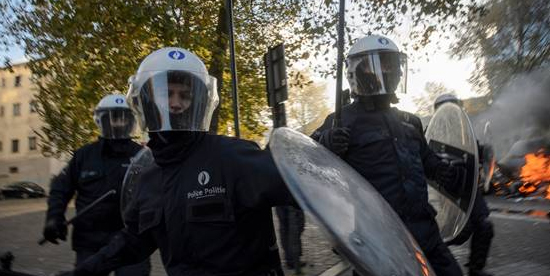 
The European Federation of Journalists (EFJ) together with the AJP, the Belgian Association of Professional Journalists, strongly condemn the recent police violence used against press photographers, who clearly declined their identity as journalists while on duty.

During the national demonstration held on 6 November in Brussels, a press photographer working for Sudpresse newspapers group was struck by a punch by police officer while he was taking a picture of another wounded policeman. Only the intervention of two journalists has been able calm the police, reports the AJP.

“Moreover, a press photographer working for Photo News press agency was attacked twice. A first wave of police had initially identified the independent photojournalist and a young freelance colleague in order to avoid the use of pepper spray on them but a second wave of policemen purposely pummeled the two photographers. Both journalists had yet clearly expressed being a member of the press, deplores the AJP. Overthrown shortly afterwards by a protester, the same photographer was again struck by several police officers while he was on the ground. A doctor has officially noticed the injuries. Consequently, the press photographer is unable to work for three days according to the medical notice. His equipment was also damaged by the police with two optical now in poor condition.”

The AJP informs that it will support its members in their judicial complaint and will careful monitor this cases. “When press photographers are present in a public event, it is to do their job and implement, with others, the freedom of information and the public’s right to be informed. It is not acceptable that some members of the security forces make no distinction between peaceful journalists and violent protesters. The Association of Professional Journalists urges the police authorities to guarantee the security of media professionals in similar circumstances.”