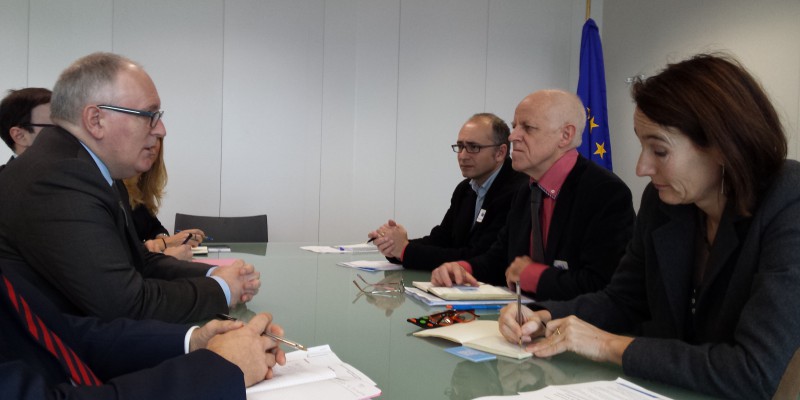 
(Brussels, 28 November 2014) The First Vice-President of the European Commission, Mr. Frans Timmermans, has told a delegation from the European Federation of Journalists (EFJ) that sustaining quality journalism and putting Europe’s media freedom back on track will be high on his agenda.

Mr Timmermans, the First Vice-President who is also the EU Commissioner in charge of Better Regulation, Inter-Institutional Relations, Rule of Law and Charter of Fundamental Rights highlighted that the financial crisis in the European media industry is affecting journalists’ rights, jobs and journalism as a public good.

“Preserving reliable and quality information is an existential question for democratic societies. Such information rests on the hard work of professional journalists who investigate and find facts. This does not come ‘for free’, it needs to be properly funded and remunerated.” said Mr Timmermans.

‘‘Today, journalists are facing more pressure and legal restrictions than ever before. The misuse of laws on defamation, anti-terrorism, data retention and data protection have hindered the development of a free media in Europe. The European Commission must stop governments from abusing these laws by turning them into a media muzzle tool to restrict media freedom,’’ said Blicher Bjerregård.

He has also highlighted the case of Macedonian journalist Tomislav Kezarovski who is under house arrest and the number of imprisoned journalists in Turkey.

The EFJ President also called on the EU to act on transparency on media ownership, financial models for public service media, media pluralism and authors’ rights.  ‘‘The EU should be tough on un-authorised use of content protected under authors’ rights because they have a direct impact on pluralism in the future European digital single market,’’ said Blicher Bjerregård.

‘‘Support for professional and good quality journalism must go hand in hand with transparent media ownership in order to regain trust in the media,’’ replied Mr Timmermans.

Mr. Timmermans gave his backing to the EFJ and its members in the fight to protect media freedom, safety of journalists and independent journalism across Europe.