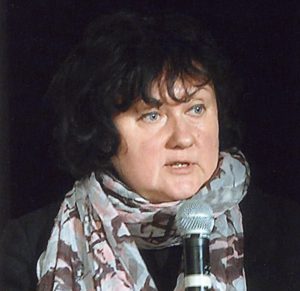 In 2013 elected Vice president of EFJ. Participant of number of International  projects and programs on gender, human rights, safety of journalists  and freedom of expression under UNESCO, UN, OSCE umbrella. In 2014-2016- Russian coordinator of  Dialogue of professional organizations of Ukraine and Russia under umbrella of OSCE. Member of GAMAG Europe.

Journalism as public good is challenged as never before today. Status of profession is challenged as well. And never in history journalists faced so strong and cruel direct violence. Culture of impunity is everyday practice in many places in the world, and Europe  as well. In my home country Russia more tan 350 media professionals lost their life, have been killed, disappeared, or died in unclear circumstances since 1991, and many cases ended with impunity. Journalists face new and more sophisticated forms of pressure, and attacks – including threats and harassment in Internet. New technologies bring also new unexpected  problems, and some  voices call already for  replacing journalists by cheap  information workers and efficient managers, and even robots. The very concept of free, responsible and ethical journalist should be defended and protected. New conflicts  involve media companies into information wars, and journalists are pushed to become sort of soldiers of those wars. And those who resist face new problems and threats.

There is no any doubt that  professional solidarity  is the only way to support- and to save our profession, and journalists,  as well as free, responsible and ethical journalism. journalism as public good.

Three years in EFJ showed that solidarity is important in protection of journalists rights, in combating impunity even in the most difficult situations. New investigations of crimes against journalists in Russian Dagestan, Serbia and other places are result of solidarity work and  gave hope o many people.

Solidarity helped to release journalists from jail, and gives hope to release all of them. To release all journalists detained during conflict in Eastern Ukraine, it was result of Dialogue of Ukrainian and Russian professional organizations” Two Countries, One Profession”, supported by OSCE, helped to do that. Journalists are not soldiers, they should not be looked and used as tools in political competition, they must work free and  do their job safe- this idea supported many media professionals  in 2014- 2014. Solidarity helped to  raise gender awareness in new  issue- threats for women journalists in Internet, and in protection of freelancers, what started under umbrella of UNESCO and new initiative Global  Alliance Media and Gender in Europe.Solidarity is the only way to protect labour rights and social protection of journalists during crisis and new attempts to squeeze the market and cut diversities because of financial problems.

Solidarity is hard everyday work. And we should build stronger solidarity  among all EFJ members, and involve each affiliate into EFJ mainstream  activities, to develop new ways of cooperation between East, South and West, based on  main values and principals of EFJ and IFJ.
I do believe that we should end impunity during our life time in Europe, and plan to go on  working with stop impunity projects and programs. Another  point is combating hate speech and aggression in the media, including new media. We need to develop comprehensive strategy  devoted to this issue.
I am glad that recently we started creating new gender  project, what could strengthen and mainstream gender work of our affiliates, to  protect better women journalists, and involve new forces and new voices into EFJ work.