After Charlie: against terror, journalists must redouble their commitment 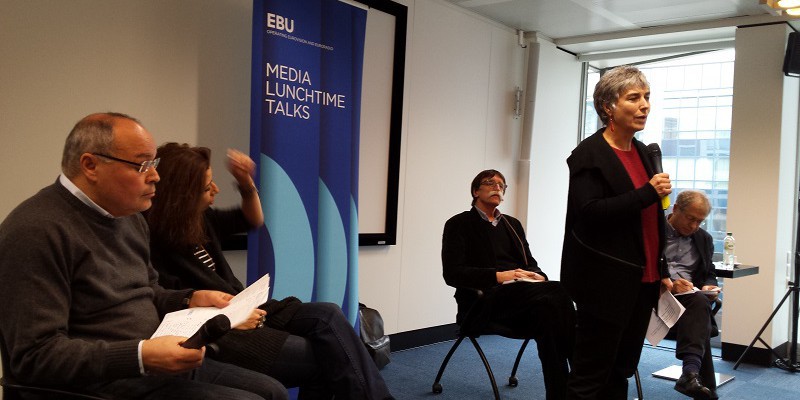 
On Thursday, the European Federation of Journalists (EFJ) organised a media lunchtime debate with the EBU, the European Broadcasting Union and ENPA, the European Association of Newspaper Publishers. The theme of the meeting was: “#JESUISCHARLIE: Publish or not to publish, that is the question.”

Jean-Paul Marthoz, European adviser for the CPJ, the Committee to Protect Journalists, and member of the EJN, Ethical Journalism Network, moderated the debate. He opened the discussions by recalling that “journalists are not irresponsible. Before each publication, there’s always a debate. (…) However, today we see a difference between the online media, like Buzzfeed and the Hufftington Post, and traditional media. When the first cartoons of Mohammed were republished, only few print newspapers choose to publish these images. »

Jerome Bouvier, former mediator at Radio France and organiser of the Assises internationales du journalisme, explained that “the cartoons have always been part of the French media environment. Many French colleagues didn’t understand the Anglo-Saxon media behavior that refused to publish the Charlie Hebdo’s cartoons but didn’t hesitate to publish an image of the police officer shot down. It’s a totally different approach. »

Safia Kessas, RTBF journalist and producer of the investigative show “Tout ça ne nous rendra pas le Congo”, insisted: “At the RTBF, it was obvious that we had to publish the cartoons. (…) I’ll could never self-censorship me. I refuse freedom of expression to be chewed by anyone and I will continue to report because that’s my job!”

Nourredine Fridhi, correspondent for the pan-Arab channel Al-Arabia described the complex situation in Muslim countries: “In Tunisia, we didn’t publish the cartoons but we talked about it. Our media and Western media haven’t got the same vision of the Holy. (…) What Charlie Hebdo lived, we live it every day in Syria, Iraq … “

Jean-Paul Marthoz fears the increase reflex of self-censorship in the newsrooms: “I hope that, in order to avoid conflicts, multiculturalism won’t force us to commit self-censorship?”

Dominique Pradalié, General Secretary of the French National Union of Journalists (SNJ), said that currently, “seven French journalists were threatened with death,” and called for a more intensive fight against  the impunity of perpetrators of the murders of journalists .

Ernest Sagaga, head of the Human Rights and Safety Department of the International Federation of Journalists (IFJ), added that “the role of the journalist is not to support “le vivre ensemble”. The journalist has some civic responsibility, but he must above all keep his professional independence.”

For Jean-Paul Marthoz, “journalist and cartoonist are often walking on a red line. And sometimes they have to cross it. (…) After his colleague murdered by the Don Bolles Mafia, the American journalist Bob Greene said “You can kill a journalist, but you can’t kill a story.” The best answer we can give to those who want to terrorise the press is to increase journalists’ investigations and put ten journalists to replace the one they silenced.“