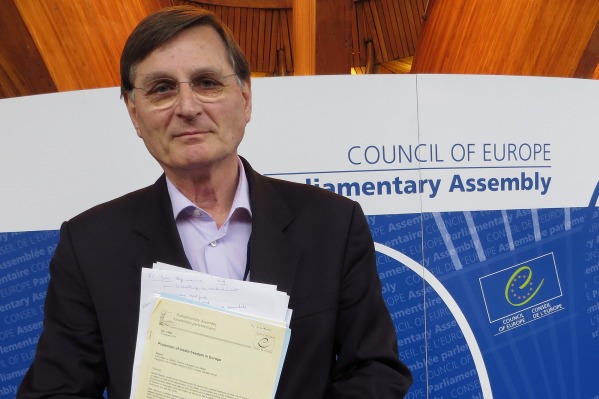 
The European Federation of Journalists welcomes today the adoption of a report on the Protection of Media Freedom in Europe by the Parliamentary Assembly of the Council of Europe (PACE) but warns about the worrying trends on press freedom in Europe.

“Although we welcome the adoption of the report, it highlighted again the worrying trends in Europe on press freedom particularly in countries where serious cases of press freedom violations are prominent,” said Mogens Blicher Bjerregård.

“Countries highlighted in the report including Azerbaijan, Hungary, Russia, Turkey and Ukraine should step up their efforts in improving their press freedom records.” emphasised Blicher Bjerregård

The two-hour debate before the formal adoption was the occasion for many of the 300 voting members of the PACE[1] to make their comments and remarks. Discussion concerned in particular Russia, Ukraine, Azerbaijan, Turkey and Hungary, where cases of press freedom violation were debated and even challenged by various speakers. The discussion concluded that press freedom is yet to be made reality in many countries represented at the PACE.

Mr. Gvozden Srećko Flego, rapporteur of the report and representative from Croatia (Social Democratic Party) has taken a strong stand on some of the governments’ denials over the cases of press freedom violations mentioned in the report. Mr. Flego insisted that the report was based on a collection of factual findings from national experts working in the field of media despite that some governments disputed the cases of press freedom violations in the report. (You can read more about the comments made by Mr. Flego in the following interview).

The report also raises concerns over media concentration and calls for measures to regulate media ownership transparency. It proposes the setting up of a “Media Identity Card” which would oblige media companies to provide information about the owners of a media outlet including the so-called “shadow owners” who contribute substantially to its income, such as big advertisers or donors.

You mentioned verbally that the report “does not take any political attitude”, but you name and shame several countries such as Russia, Turkey, Ukraine and Azerbaijan Isn’t it contradictory?

We name violations of press freedom and we make suggestions to improve the situation, so in fact we remain factual. What we do not mention in the report is that our document is based on information from experts on the ground. Sometimes we are even contacted by organisations or individuals who literally ask us to criticise their governments and put pressure on them. Of course, some of these governments reacted, in particular Azerbaijan. But in my view, they should consider our report as a “friendly expertise”, given for free.

In the resolution, you propose “to publicise a Media Identity Card” in order to improve transparency. What does it actually mean?

We want more transparency of media ownership at transnational level. This means that the “Media Identity Card” would provide information about the real owners of media outlets, not just companies without the names of individuals. And we also have in mind the “shadow owners”, for example if more than half of the revenues of a single media come from one advertiser or donor, it should be consider as a “co-owner”. The idea is adopted, but of course we need to continue the discussion about its implementation.

The recommendation to the Ministers asks for more cooperation with NGOs in the field to deal with violations of media freedom. How can this be done?

We are open to any initiative coming from the civil society. For example the Internet-based Freedom of Expression Platform relies on the input of NGOs. It is now legally established and it will be working in March. It is a key area of cooperation because there is no press freedom without safety. Our objective is to be preventive, not just reactive or “sanitary”. If NGOs provide us good input we will be able to act on legislation before it is too late.

Every two years, the PACE adopts a report on media freedom. What is happening in between at the Council of Europe?

We act, both the Council of Europe and Member States. We are in contact with the experts on the ground on press freedom violations.

What else would you like to add to your report?

To me it is very important that media freedom is debated at national level. This is why I insisted that national Parliaments at point 14 of the Resolution to “hold annual public debates (…) with the participation of associations of journalists and the media on the state of media freedom”.