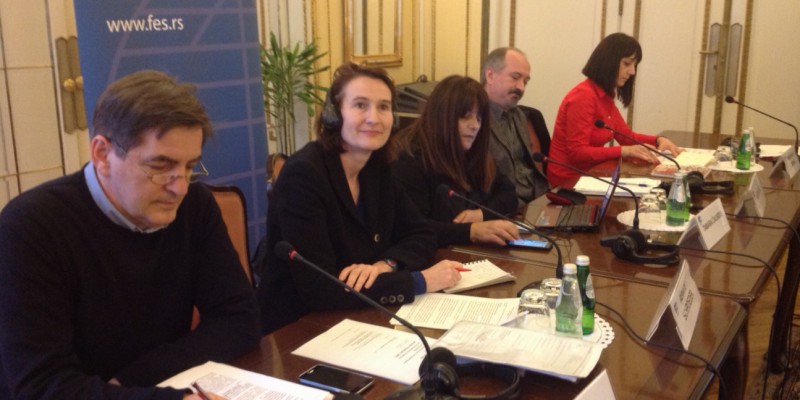 
(05/01/2015) The European Federation of Journalists (EFJ) has  participating in the FES-SINOS Trade Union Seminar in Belgrade (Serbia). The seminar organised by SINOS (Journalists Union of Serbia, EFJ affiliate), with the financial support of the Friedrich Ebert Stiftung (FES), has focused on the lack of social dialogue and the role of trade union organisations in the private media.

The second part of the conference dealt with how to improve the privatisation of media process in Serbia and what role journalists’ union should play in this process.

Average salary of journalist in Serbia is 220 EUR.

“The situation is getting worse though more regulated” A university professor of journalism talked about “regulated chaos” after 10 years of work on the Serbian Media Strategy. The meeting also discussed the need to get more unified among journalists’ organsiations.

#Serbia. Governments are not innocent in lack of Social Dialogue in media. Much more political pressure is urgent.#SINOS.@EFJEUROPE

#Serbia. Vital to recruit journalists from private media in unions. Need for strategies on what #union can offer. #SINOS @EFJEUROPE

#Serbia: Why there are no trade unions in private media? Seminar by SINOS w. FES Belgrade now. @EFJEUROPE @DeshaGli pic.twitter.com/HNpN22dubS