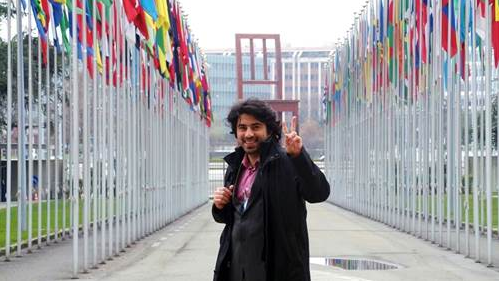 
Update (13/06/2015): Emin Huseynov flew out of Azerbaijan on the plane of Switzerland’s top diplomat Didier Burkhalter, who attended the Euro Games ceremony in Baku late on Friday (12/06/2015). Emin Huseynov who had been sheltering for 10 months at the Swiss embassy in Baku, is now in Bern. Julian Assange’s Courage Foundation helped him escape Azerbaijan and fly to Switzerland.

Reportage broadcasted this week by the Swiss national television shows the case of Azeri journalist and human rights defender Emin Huseynov, secretly hidden in the Swiss Embassy in Baku (Azerbaijan) since last August due to a wave of repression in the country.

According to the Swiss Radio Television (SRF)’ Rundschau program, the prominent and internationally recognized human rights defender Emin Huseynov secretly sought refuge last 18 August at the Swiss Embassy in the Old City of Baku, capital of Azerbaijan, to gain protection as he feared for his life. His family is facing various kinds of pressure from authorities since then, media reported.

“We have no positive perspective for the future. Repression against the freedom of opinion is continuing, including the online media, » he stated in one of his last public interviews before going into hiding.

Huseynov (35) is the founder and current leader of the Institute for Reporters’ Freedom and Safety (IRFS), a non-governmental organization fighting for press freedom and journalists’ safety and the leading media rights organization in Azerbaijan.

According to the video, in the midst of an unprecedented repression against civil society, the activist and critic of Azeri President Ilham Alijev’s regime was facing imminent arrest before hiding. Huseynov is accused of various criminal charges as tax evasion, illegal business and abuse of authority.

The activist was arrested in 2008 and 2009 and suffered beatings that allegedly amounted to torture.

The Swiss government has been negotiating with Azerbaijan, but the authorities have been against letting Emin Huzeynov leave the country. The Swiss foreign ministry said that “We have been discussing the matter with Azeri government in order to find a solution.”