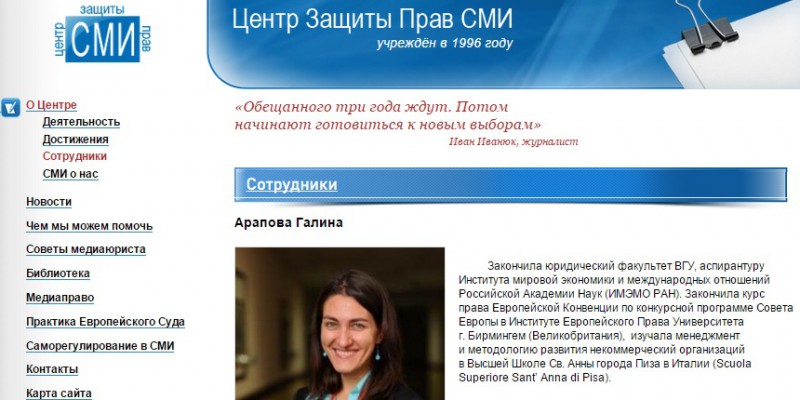 
The European Federation of Journalists (EFJ) and its Russian affiliate, the Russian Union of Journalists (RUJ), are deeply concerned by the new threats against the Mass Media Defence Centre (MMDC), which is the only Russian NGO specialising in media law, as well as providing legal assistance and protecting media rights on a daily basis.

Over the past two years, an unprecedented number of laws have been adopted in Russia which dramatically restrict the activities of all independent non-governmental organisations (NGOs). According to a law passed in 2012, Russian NGOs that receive foreign funding must declare themselves as “foreign agents”.

This law threatens not only the organisations but also endanger their staff, risking to ten or more years of imprisonment for the vaguest of reasons, such as simply sharing information with non-Russian organisations.

The Russian government officially labels now the MMDC and its director, Galina Arapova, as “foreign agents”. “MMDC never had political activities,” said Nadezda Azhgikhina (RUJ), Vice-President of the EFJ, “It is the only organisation in Russia providing legal support and holding educational events for journalists, judges, media lawyers and law enforcement bodies. MMDC is partner of RUJ, and its director, Galina Arapova, is a RUJ expert in media law. She is also theVice-Chair of Article 19 and member of many public initiatives in Russia and abroad. She is beeing attacked by Russian authorities because of her sharp statements and criticism of current restrictions of freedom in Russia”.

“The Russian ‘foreign agent’ law is discriminatory and repressive,” added Ricardo Gutiérrez, General Secretary of the EFJ, “It seems that this is just a new way for the Russian government to persecute independent media, trade unions and NGOs”.

The EFJ and RUJ call on the Russian government to respect the important role that MMDC and other institutions of civil society play for both the public and the state and, therefore, to stop to persecute them.