Why do they leave journalism? 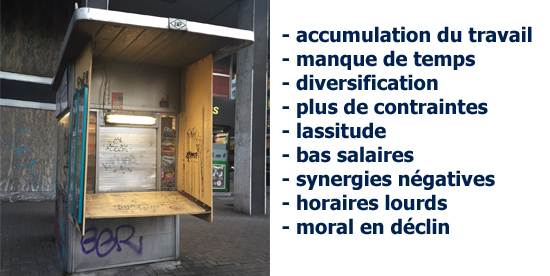 
“Why do they leave journalism?” – This is the question asked to 38 former journalists by journalism student Hélène Brédart in a project initiated at the Université de Liège and reproduced by Jean-François Dumont of the Belgian Association of Professional Journalists (AJP, member of EFJ). The results of the project published in the latest edition of the monthly Journalistes by the AJP show that the deteriorating working conditions and practices in journalism make are major reason why journalists left the profession. The most frequently mentioned reasons for journalists to leave their job are:

• Increasing workload: The digital development and restructuring measures are putting more pressure and workload on journalists who are not paid for doing additional tasks.

• A lack of time: The demand for live news and immediacy means that journalists have less and less time to cross-check sources and conduct investigative journalism.

• Cross-platform media production: The growing importance of digital media platforms means that journalists can no longer produce content for one media platform. They are obliged to produce the same content adapted for different platforms (such as print, broadcasting and online media). Usually this means more work and the requirement of technical know-how and less emphasis on quality content.

• Editorial constraints: Journalists feel less independent due to the downsizing of local news and the growing demand to produce shorter and sensational news.

• Burnout and boredom: Some journalists felt that they are not being challenged anymore because they found themselves repeating the same topics.

• Salary: Low salary is mentioned as the first reason for their departure. Low possibility of salary increase, bosses breaking their promises, little gratification for taking on new responsibilities, overtime , little holiday and stresses are the everyday life of media workers.

• Working hours: Long working hours is common in journalism. But for some, especially radio journalists, who have to work both night and day sometimes without sufficient breaks. This results in little work-life balance.

• Moral impact: The impact of financial crisis and the negative attitudes of some senior journalists towards the changes in journalism have contributed to the low morale.