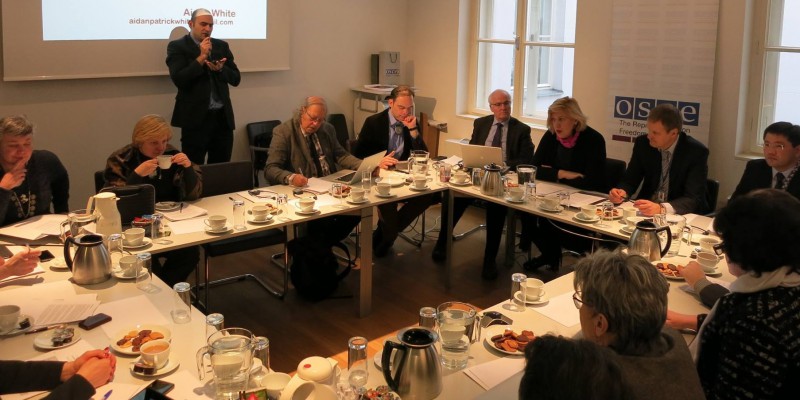 “The conflict, violence and war propaganda has created a profound atmosphere of hostility and distrust which governments are exploiting to impose their own forms of control and censorship on media,” said Jim Boumelha. “This dialogue is crucial for rebuilding the confidence between journalists and ensuring that they can unite against censorship and intimidation, defend their rights and freedoms and continue to provide balanced and impartial news to the public.”

After a year of eight journalists’ deaths in Ukraine and countless abductions, assaults and intimidations, so far there have been no new major incidents involving journalists in Eastern Ukraine in 2015. The pressure at home however remains intense.

In Russia the government have launched an investigation into the work of the Mass Media Defence Centre, Russia’s leading NGO for providing legal defence of media and journalists, for acting as a ‘foreign agent’. The RUJ is fighting two court cases in attempts to remove them from their offices and the journalists Dom, the traditional house of journalists in Moscow.

In Ukraine the national council for TV and Radio issued a third formal warning against the broadcaster 112 Ukraine for airing anti Ukrainian views following a live talk show which included an interview giving a Russian viewpoint. They now face the threat of closure. At the same time Russian journalists are being systematically denied accreditation either to work in the country or to attend official press conferences.

“Denying accreditation to journalists and attempting to censor unwelcome opinions are both counterproductive and act against the democratic values and basic human rights that governments claim to be defending,” added Boumelha.

“The threat of closure targeting 112 Ukraine seems clearly disproportionate. Regulation requirements must not be misused to silence dissenting voices. The Ukrainian government must understand that there is no free and independent press without media pluralism,” said Mogens Blicher Bjerregård, EFJ President.

The participants in the OSCE dialogue issued a joint declaration condemning violence and hate speech and reinforcing that “professional solidarity will be able to overcome stereotypes and the politicians and propagandist’s desire to drive a wedge between journalists of our countries and turn them into a tool of manipulation.”