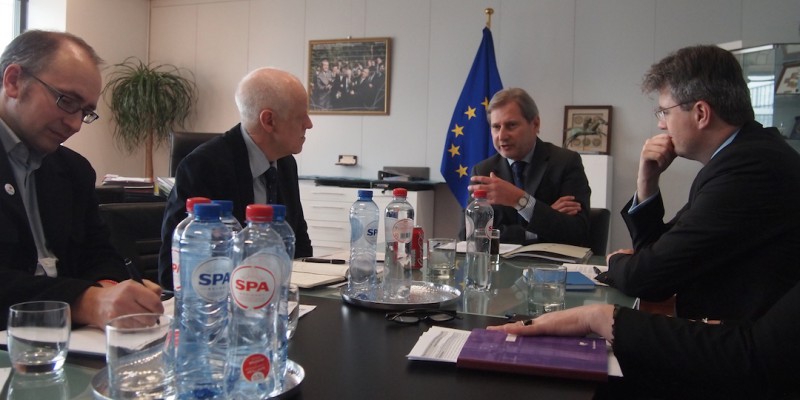 
In a meeting with delegates of the European Federation of Journalists (EFJ) on Friday 20 March 2015, the EU Commissioner for European Neighbourhood Policy and Enlargement Negotiations, Mr. Johannes Hahn, has called for more progress made on press freedom in the West Balkans and Turkey.

Commissioner Hahn expressed his concerns about media freedom in West Balkans and Turkey and pointed out that it was not satisfactory to see these countries receiving the same critical comments every year. He confirmed that the Commission considers media freedom as a fundamental right and as a key element in the transformation of countries into democratic societies. The Commissioner added that he will continue pushing governments to make progress in this important area.

Mogens Blicher Bjerregård, the EFJ President has shared with Commissioner Hahn the major concerns facing journalists and media workers in Macedonia (FYROM), Montenegro, Serbia and Turkey including intimidation and violence, economic and political pressure hindering independent media and the lack of labour standards.

“Fundamental rights like press freedom, freedom of association and freedom of expression should be the key indicators of the country’s readiness to become part of the EU,” said Blicher Bjerregård.  He underlined that “the European Commission should put more pressure on candidate countries regarding press freedom issues”.

Mustafa Kuleli, the General Secretary of the Journalists’ Union of Turkey (TGS), who participated in the meeting, explained to Commissioner Hahn about the poor labour standards in Turkey. “Freelance journalists are forbidden to join a union. It is illegal for journalists’ unions to represent freelance journalists and defend their rights,” said Kuleli.

Commissioner Hahn underlined the importance of basic standard of labour rights to be respected by candidate countries.

The Commissioner will continue to cooperate with other inter-governmental organisations (such as the Council of Europe, OSCE and UNESCO) to address media freedom violations. The EFJ asked the Commissioner to provide support to professional journalists’ organisations in order to improve working conditions of journalism, ethical standards in journalism and media pluralism.