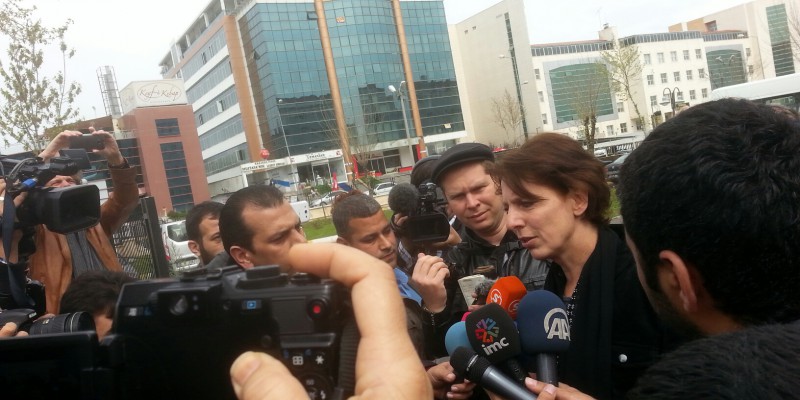 Mogens Blicher Bjerregård, EFJ President said, “This is seriously alarming. The judicial system and the level of judicial harassment facing journalists in Turkey show more than ever that more actions must be taken.

“We stand together with all human rights organisations and urge both national governments and international institutions to put human right issues in Turkey as the central part of their negotiations with the Turkish government.”

Geerdink told the EFJ that she was not shocked by the news. She said, “This is Turkey. Things always happen beyond your belief.”

@EFJEUROPE shocking, but i wasnt shocked – this is turkey, always things beyond believe and reason happen here. thanks a lot for support!

Ramazan Demir, Geerdink’s lawyer said, “Despite the court’s quite sound reasoning to acquit, this shows they have no intention of leaving Frederike alone and are determined that she be punished.”

According to Geerdink’s lawyer, the office of the chief prosecutor has filed a preliminary challenge to the ruling, saying it was unlawful and that it would ask a higher court to overturn it once the judges’ detailed decision is released in the coming weeks.

“The chief prosecutor’s decision puts another shadow on press freedom in Turkey,” said IFJ General Secretary, Beth Costa. “We cannot accept that a government continues to harass our colleagues on the ground in total impunity. Geerdink must be entitled to carry out her duties as a journalist without fear of imprisonment.”

Geerdink, a Dutch freelance journalist and correspondent for Turkey was charged with producing propaganda for terrorist organisations because of her reporting and posts on social media on the outlawed Kurdistan Workers’ Party (PKK).

On Monday, a court in Diyarbakir ruled in favour of Geerdink after the prosecutor said that there was not enough evidence to try her and that her reporting and posts on social media about PKK do not amount to “terrorist propaganda” but was journalism.

The IFJ, the EFJ and their affiliate in the Netherlands (NVJ – Nederlandse Vereniging voor Journalisten), urge the court to uphold its decision made on Monday to acquit Geerdink. “Geerdink did nothing wrong but simply did her job as a journalist. The Turkish authorities must drop the charges against her,” said the organisations.

For more information about Geerdink’s case, please refer to our previous posts on our website.