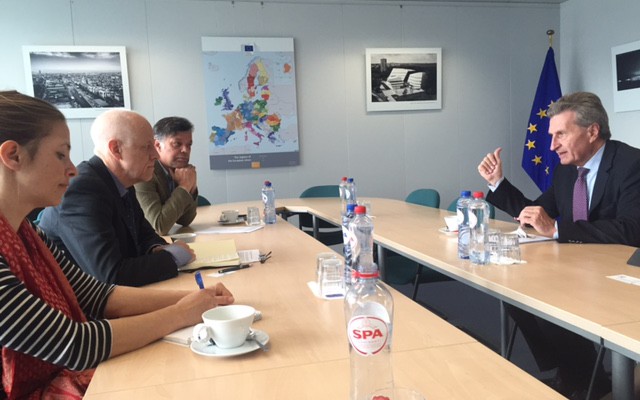 
Günter Oettinger, EU Commissioner in charge of Digital Economy and Society, met delegates from the European Federation of Journalists (EFJ) on Thursday (30/04/2015) about the plan for a reform of the EU copyright/authors’ rights legislation taking into account new technological developments.

Mogens Blicher Bjerregård (Danemark, EFJ President) took the floor to stress that “staff journalists, freelancers, press photographers, cartoonists, graphical editors and other media workers should clearly be considered as authors contributing contents for the online, audiovisual or print media industry. The EU creative industry is a big market with an annual turnover of 500 billion euros. In Denmark alone, between 4 and 5 million euros are collected and  paid to journalists as a result of the exception for education. In the UK, press photographers receive 4 million euros on a yearly basis for the same exception. It is  critical to protect journalists’ authors’ rights as they have a clear impact on their jobs and on their living. Authors’ rights enhance the credibility of the media, promote media pluralism and protect the journalists against the misuse of their work. No new exception should be allowed. For instance, allowing for free use in the educational sector will damage the production of new content and will lead to a dry out of the huge pluralistic content as the educational sector’s access to pluralistic works will be replaced by mainstream content from a very few publishers and production companies.

The recent court rulings of the European Court of Justice like Best Water are affecting authors rights of journalists in a negative way mentioned Michael Klehm (Germany, senior advisor for DJV on European affairs). This must be observed in the author´s rights legislation of the EU.

Mike Holderness (UK, member of the EFJ Authors Rights Expert Group) reminded that the authors’ rights debate “is not a two sided story between authors and users because the intermediaries have also their interests in the game. The Commission is wasting its time making law on authors’ rights if it does not also act to stop unfair contracts. We need EU regulation to offer the possibility to trade unions to collectively bargain on authors rights, to forbid multiple usage for single payment, to bring cases to the court when journalists fear retaliation by publishers and broadcasters if they spoke up to defend their rights. Fair contracts are also important for citizens because in today’s economy citizens are also producing content for online media platforms.”

The EU Commissioner in charge of Digital Economy and Society and the EFJ delegation discussed about the necessity for “the European Union to defend its cultural dimension and expand its creativity. Ownership of a building is comparable to ownership of any other property. Our creative industries need to stabilize their market positions and we should inspire future generations willing to join the creative industry”.

The European Federation of Journalists is looking forward to work with the EU Commissioner’s office in providing best examples and collecting data on authors rights.