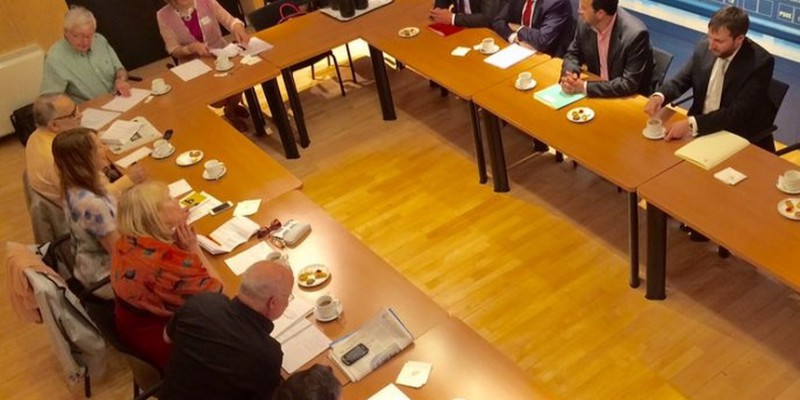 
A group of international press freedom and professional organisations, including the European Federation of Journalists (EFJ), completed on Friday a three-day high-level mission to Spain, where a controversial new law on public security is set to take effect on July 1.

In a series of meetings in Madrid, the group, led by the International Press Institute (IPI) and including representatives from the Committee to Protect Journalists (CPJ), the European Federation of Journalists (EFJ) and the Madrid-based Platform for the Defence of Free Expression (PDLI), as well as independent legal and regulatory experts, urged Spanish political parties to include key press freedom issues in their platforms ahead of national elections scheduled later this year.

“We are grateful for a series of fruitful conversations with Spanish political parties on issues related to freedom of expression and the press, and we reiterate our call for these issues to be taken up by all parties contesting the upcoming elections,” IPI Director of Press Freedom Programmes Scott Griffen said. “No country can afford complacency when it comes to protecting freedom of expression and, given the number of significant issues that we have identified, it is clear that special scrutiny is warranted in Spain.”

Griffen noted that while parties in Parliament, including the ruling Popular Party (PP), made representatives available to meet the delegation, the Ministries of Justice, Interior and Industry – the latter of which oversees regulatory issues – did not do so.

“Given the importance of these discussions, which focused on the effects of specific government initiatives on the fundamental rights of Spanish citizens, it is disappointing that not a single member of the government met with our delegation,” he commented.

Popular Party MPs defended their track record on media issues, despite the fact that Spain’s documented slide in press freedom has occurred largely since 2011, when the party took power. Notably, some critics have accused the party of utilising the “excuse” of Spain’s recent financial and social turmoil to push through legislation – at times using executive decrees – that weakens guarantees for freedom of expression and pluralism in the media.

Party representatives, however, denied that claim.

“We have not adopted any restrictive measures with regard to freedom of expression,” PP parliamentary speaker Rafael Hernando Fraile told the group.

Opposition parties with whom the group met, as well as representatives of the Podemos party, which holds seats in regional and European parliaments but none yet in the national Parliament, expressed their intention to repeal the Law on the Protection of Public Security, popularly known as the “gag law”, which punishes unauthorised use of photographs or recordings of police and security forces with heavy administrative fines. The law has been the target of intense criticism from the media, national and international civil society representatives, and U.N. human rights officials for its potential consequences for the freedoms of expression and assembly.

Group members also emphasised their concern regarding two other legal measures: a vaguely worded penal code reform related to terrorism and cybercrime, which was passed with support from the Socialist Party, and a pending reform of the Law on Criminal Procedure that includes a prohibition on photographing persons detained by police.

In conversations with officials from various parties, members of the international delegation stressed that even in the case that a particular reform is undertaken for legitimate reasons, it may still have unintended negative consequences for freedom of expression and the press. Legal experts who joined the mission noted, for example, that while updating legislation to account for modern concerns of terrorism and cybercrime may itself be perfectly valid, Spain’s recent penal code reform risked encouraging self-censorship in the media due to its highly ambiguous language.

During an audience with the Joint Parliamentary Oversight Committee for Public Broadcasting, delegates urged MPs to take steps to promote the independence of the Spanish public broadcaster, RTVE. The broadcaster has come under international scrutiny for perceived bias in its coverage of sensitive topics and for reportedly sidelining its reporting staff in favour of outsiders who have little experience in public service broadcasting but carry particular political leanings.

MPs from the Socialist Party, the United Left and the Mixed Parliamentary Group declared an intention to restore a requirement that appointments to the broadcaster’s executive board be passed by a two-thirds majority. The PP’s decision to scrap that requirement and replace it with a simple majority in 2012 is said to have allowed the government to assert political control over the broadcaster. Shortly before the international delegation’s visit, RTVE board president José Antonio Sanchez stirred controversy by declaring to the Oversight Committee that he “votes for the PP and will continue to do so”.

Hernando Fraile, in comments to mission delegates, maintained that the change had been a response not only to a “political blockade” in the appointment process but also to the PP’s view that RTVE “was not independent, but [was] rather anti-government” and “pro-Socialist”.

The June 17 to 19 mission was a follow-up to a four-day, international fact-finding mission to Spain in December. Participants in the 2014 mission held over 35 meetings with representatives of media and civil society in both Madrid and Barcelona. In March, the international organisations involved launched a 50-page report on their findings, highlighting seven key issues of concern. Separately, PDLI published its own comprehensive report on freedom of expression in Spain that same month.

The release of both reports came at the beginning of an extraordinarily packed election year in Spain, which saw local and autonomous elections in May. Catalan regional elections are scheduled to take place in September and national parliamentary elections appear likely to be held in November.

IPI plans to release a full report on the mission in the coming months.