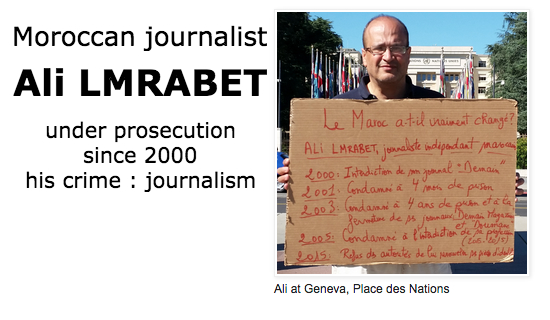 
The European Federation of Journalists (EFJ) is calling today (20/07/2015) the EU foreign affairs chief Federica Mogherini to raise the case of the Moroccan journalist Ali Lmrabet during her first visit to Morrocco on July 21 where she will hold meetings with government officials, members of Parliament and civil society. Mrs Mogherini, who is also the vice-president of the EU Commission, will discuss the EU-Morocco partnership and other areas of mutual cooperation related to trade, migration, security and climate change issues.

“As the representative voice of European journalists, the EFJ is asking the EU High Representative of the Union for Foreign Affairs and Security Policy, Mrs Federica Mogherini, to pay a specific attention to the situation of human rights defenders, press freedom and freedom of expression during her negociation talks with other countries,” said Ricardo Gutierrez, EFJ General Secretary.

The EFJ has recently received alarming information regarding the case of Ali Lmrabet, a well-known Moroccan journalist, columnist and human rights activist in Europe. Since June 24, he is currently doing a hunger strike in Geneva following the denial of his passport by the Moroccan authorities because the journalist wanted to resume publishing newspapers after his ten-year ban has expired. In 2005, he was sentenced to a 10-year ban on working as journalist for writing in an article published by the Spanish daily El Mundo that the Sahrawis living in Tindouf (Algeria) were “refugees” and not “hostages” held against their will. According to Reporters without Borders, “the authorities in the northern city of Tétouan have been refusing to give him a residence certificate since 20 April. In a statement issued on 5 May, quoting the interior minister, the Tétouan local administration said it had been established that Lmrabet does not live at the Tétouan address he gave, which is his father’s home.” Ali Lmrabet is convinced that the authorities are refusing him a residence certificate in order to prevent him from publishing again. “Bureaucracy cannot be used to ban press freedom and freedom of expression ! Journalists must be free to work and publish, Morocco should end this indirect way of censorship !,” said the EFJ

The EFJ is pointing Mogherini’s attention to the recent “Their Eyes on Me: Surveillance in Morocco,” report published by Privacy International and the Moroccan Digital Rights Association (ADN) documenting the online surveillance methods used by the Moroccan authorities against journalists and information activists.

“You can’t ban and prosecute journalists on the one hand, use illegal surveillance methods to track their sources and offer full impunity for media violators on the other hand. If Morocco wants to be considered as a democracy and partner, it should immediately change its methods regarding journalists and human rights defenders,” said the EFJ.