Turkey: 18 journalists threatened with 7.5 years in jail for publishing a photo 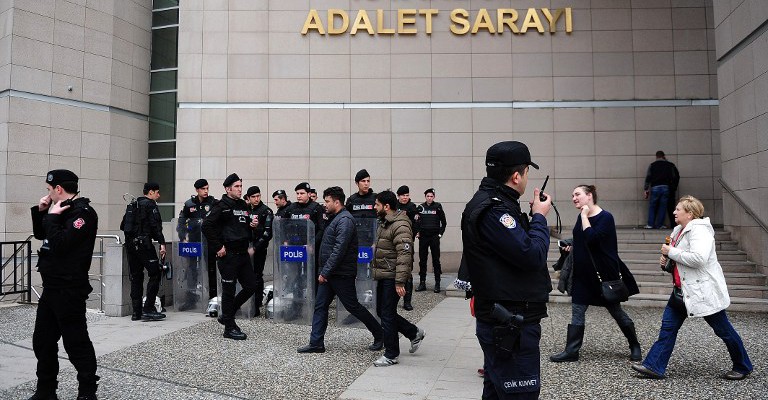 Following a series of crackdown on online media during the past weeks in Turkey, the chief prosecutors’ office in Istanbul yesterday launched a prosecution against 18 journalists working for nine different newspapers on charges of “making propaganda for a terrorist organisation” after publishing a picture from a hostage siege that took place on 31 March 2015 in Istanbul when two terrorists from the outlawed Marxist Revolutionary People’s Liberation Party-Front (DHKP-C) attacked a Turkish prosecutor in his office.

Journalists working for the daily newpapers Cumhuriyet, Millet, Şok, Posta, Yurt, Bugün, Özgür Gündem, Aydınlık and Birgün are being prosecuted for the publication of a picture showing the siege. The image widely circulated on social media was also published by several Turkish and international newspapers and news websites to illustrate their coverage of the siege. Among the 18 prosecuted journailsts, Can Dündar, the edior-in-chief for Cumhuriyet compared this case to the broadcasting of the footage depicting the execution of journalists by ISIS. Dündar said in a message published on his social media account, “7.5 years of jail sentence for publishing a photo of a hostage taken by the DHKP-C but nothing happened for broadcasting footage of hostages taken by ISIS.”

Jim Boumelha, the IFJ President said, “We are gravely concerned by the attack on media freedom by the government. This latest threat to criminalise journalists as terrorists is unacceptable. We urge the authorities to allow journalists to do their jobs in order to inform the public.”

Mogens Blicher Bjerregård, the EFJ President said, “Journalists should be allowed to make their own editorial decision without the fear of censorship or imprisonment. The government must stop abusing the judicial system and using it to silence journalists and critical voices.”

The EFJ affiliate, the Journalists Union of Turkey (TGS) defended the journalists saying “reporting the facts as they are in the public interest is called journalism, not doing propaganda on behalf a terrorist organisation”.

The 18 journalists being prosecuted in this case are :

In the past weeks, Turkey has also tightened its censorship on the internet and media.  Access to over 100 news and information websites and social media was blocked. Nearly all of the more than 77 million websites hosted by WordPress.com were inaccessible to the people of Turkey due to administrative decision taken by the Turkish authorities. TGS (Journalists Union of Turkey, EFJ-IFJ affiliate), TGC (Association of Journalists in Turkey), Disk Basin-Is (Progressive Journalists Union of Turkey) organised a gathering with Kurdish and Turkish journalists in Istanbul to speak out for peace and against the growing media censorship in the country.