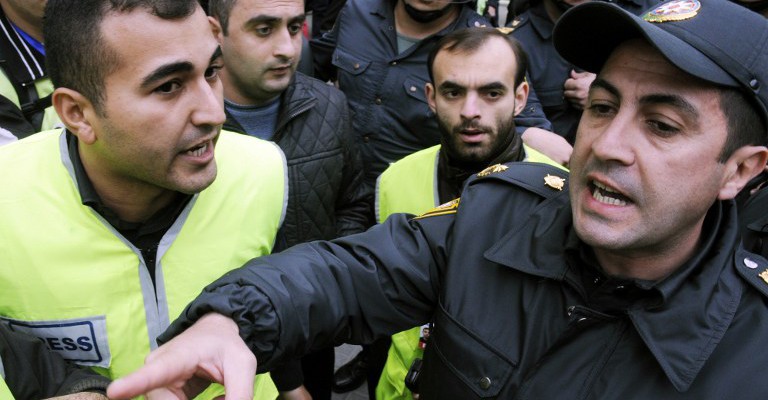 
Rasim Aliyev (31), an Azerbaijani independent journalist who was attacked and beaten by supporters of a local soccer player in retaliation for criticism posted on a Facebook page, has died of his injuries in a Baku hospital on Sunday (August 9).

The European Federation of Journalists (EFJ) and the International Federation of Journalists (IFJ) are deeply saddened by his death. “The climate of impunity for violent acts against journalists and human rights defenders in Azerbaijan may encourage some individuals to commit such grave crimes without being punished. Journalists, like every citizen, in Azerbaijan must be free to share their personal comments on social networks without fear of receiving threats from anybody. The country must also stop its permanent prosecution against journalists and release all of them in order to decrease the current tensions,” said Mogens Blicher Bjerregård, EFJ President.

After the beating and while in the hospital on August 8, Rasim Aliyev gave an interview to Meydan TV. He said everything started when he criticized the football player Cavid Huseynov for his behavior after his Azerbaijani club team, Qabala FK, played the Cypriot club Apollon in Cyprus in a UEFA Europa League match on July 30. Journalist Aliyev wrote on his Facebook page that he did not want “someone this amoral, impertinent, and unable to control himself to represent me on European soccer fields.” Following his comment, the journalist received a call from someone claiming to be Huseynov’s cousin, who yelled and swore at him on the phone before inviting him to present his apologies.

After getting out of his car to shake hands, the journalist said he was suddenly attacked from behind and knocked to the ground, kicked and beaten by six men for about 40 seconds. The perpetrators took his phone and wallet and ran away in different directions.

The authorities said “a criminal case was launched into the incident and an investigation is underway”.

Rasim Aliyev was a freelance journalist working for Ann.az website and mainly used to work as director for the Institute for Reporters’ Freedom and Safety (IRFS), one of Azerbaijan’s leading media-freedom organizations until it was forced to shut down last year after its bank account was frozen, office raided, and its director, Emin Huseynov, harassed. “We strongly believe that Rasim Aliyev has been targeted due to his work for our organisation,” said IRFS office in Baku.

The EFJ together with the IFJ and Article 19 have referred the violation of media freedom in this case to the Council of Europe online platform for the protection of journalism.

Photo : Journalist Rasim Aliyev (in the center with a beard), during a protest in Baku on November 17, 2012 where a local police officer argues with a journalist wearing a reporter’s identification yellow vest. Police broke up at the moment an unauthorised pro-democracy protest by around 100 opposition activists in central Baku, detaining dozens and beating up several journalists. AFP PHOTO/ TOFIK BABAYEV