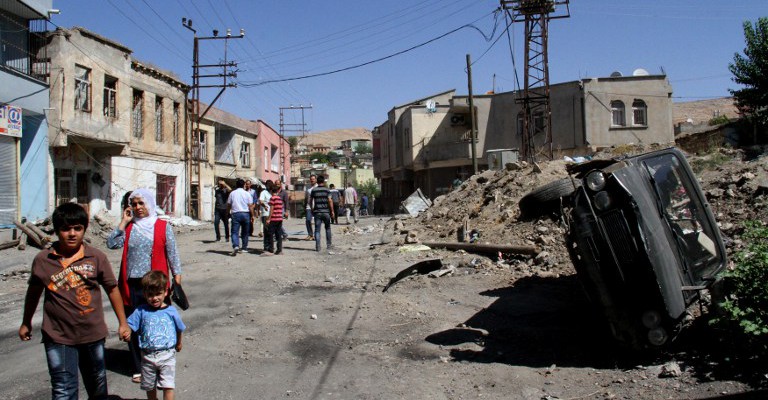 
Update (03/09/2015): the Vice News journalists arrested earlier this week in Turkey’s south-east on charges of having links to a terrorist organisation have been released today. But the journalists’ fixer, Mohammed Ismael Rasool, a journalist and translator who has worked extensively across the Middle East with VICE News, Associated Press, and Al Jazeera, has had his appeal of release rejected.  The European Federation of Journalists (EFJ) has joined Vice News today to call on the Turkish authorities for a swift end to this unjust detainment and to grant his immediate release.

The reporters, who work for US-based media outlet Vice News, were yesterday accused of terror charges following their arrest last week in Diyarbakir province of Turkey on allegations of connection with the so-called Islamic State (IS).

“Our colleagues who are currentlydetained in Turkey must be release immediately and unconditionally. They are not terrorists – they are journalists and should not be treated as criminals,” said NUJ general secretary, Michelle Stanistreet. “The NUJ continues to be alarmed at the scale of attacks against press freedom in Turkey – a member of the Council of Europe and the government should abide by article 10 of the European Convention on Human Rights on freedom of expression”.

One of the detained journalist is an NUJ member, the union said. The EFJ and the IFJ suspect the authorities are seeking to intimidate journalists who are covering the current clampdown on pro-Kurdish militants, following the recent escalation in violent attacks in the country.

“The charges against our British colleagues working for Vice News are unsubstantiated as it makes no sense why professional journalists would collude with terrorist organisations and the authorities have not shown any evidence so far to suggest the alleged connection with the IS,” said  IFJ President, Jim Boumelha. “These arrests are more about the government’s ploy to muzzle journalists covering annoying issues. Their detention is unwarranted and we call for their immediate release so they can continue reporting on the ground with no intimidation, nor undue interference.”

According to media reports, a court in Turkey’s Kurdish-dominated southeast yesterday remanded both reporters in custody following charges brought against them by Turkish prosecutors of “engaging in terror activity” on behalf of the so-called Islamic State group “intentionally aiding an armed organisation”, reports said. Their translator, Mohamed Ismail Rasool, an Iraqi national, faces the same charges while their driver was allowed to go free, reports added.

Vice News, an online channel which produces in-depth video reports, said that journalists Jake Hanrahan and Philip Pendlebury were arrested last week while filming clashes between the security forces and youth members of the outlawed pro-Kurdish PKK (Kurdistan Workers’Party) in the southeastern Turkish province of Diyarkabir. The reporters have been held in police custody since their detention and are now in a jail in Diyarbakir, awaiting an eventual trial but no date has been fixed.

Reports added that there were no further details on the evidence of their alleged links to IS group and the journalists have denied the accusations. Their lawyers said that the journalists’ hotel rooms were searched and their camera equipment and footage impounded by police following their arrest. The EFJ, which has campaigned against the abuse of anti-terror legislation in Turkey to restrict press freedom, is concerned that these arrests herald a new clampdown on independent reporting during the military offensive against PKK rebels.

“There is every reason to fear that the Turkish government is,once again, resorting to anti-terror and national security laws to silence critical journalists covering sensitive issues such as opposition to the regime,whether political or military, “ added EFJ President Mogens Blicher Bjerregard. “Those journalists are not preaching terrorism. They are just doing their job and we call on Turkish authorities to follow international standards in the application of national security laws, invoking Article 19 of the Universal Declaration of Human Rights, which guarantees the right to seek, receive, and impart information”.

Tensions and pressures from the Turkish authorities against journalists and opposition groups are escalating on the eve of new general elections to be held in the country next November. On 31 August, Turkish police raided 23 companies, including the offices of Kanaltürk television and Bugün newspapers, all belonging to Koza Ipek Medya Group, a corporation linked the government’s ally-turned-nemesis islamic preacher Fethulluah Gülen. Six people have been detained on charges of “giving financial support to the Fetullahist Terror Organisation (FETÖ) and conducting its propaganda”. Facing the same accusations are Hidayet Karaca, Samanyolu TV’s CEO, who remains in jail after 263 days of severe detention and Ekrem Dumanli, the editor-in-chief of Zaman newspaper, has been released pending trial and is still under prosecution for “being a leader of the terrorist organisation”.

“Turkish press is going through dark days again. A few days after the massive dismissals that took place at the daily Milliyet, we learn about police raids against Kanaltürk TV and radio, Bugün newspaper and TV and Millet newspaper, all belonging to Ipek Medya Group. Those actions and pressures from the government against all critical voices are also a blow to democracy at the same time. Turkey’s bad ranking in the world press freedom index is mainly caused by those pressures.
Such pressures will not prevent journalists from doing their profession and reporting the truth. The Journalists Union of Turkey (TGS) stands by the workers and colleagues at Kanaltürk, Bugün TV and newspaper and Millet and calls all the journalists to show solidarity and unity”, said TGS in a public statement.

Backing his affiliate, the IFJ and the EFJ will submit those cases to the Council of Europe’s digital platform to promote the protection of journalism and safety for journalists and to the Mapping Media Freedom project.

The IFJ, the EFJ and the Journalists’ Union of Turkey (TGS) will organise an international conference on press freedom and labour rights in Turkey, on 17-18 September in Istanbul. The title of the conference is: “Fighting for journalists rights and freedoms in a politically polarized country”. Details: here.