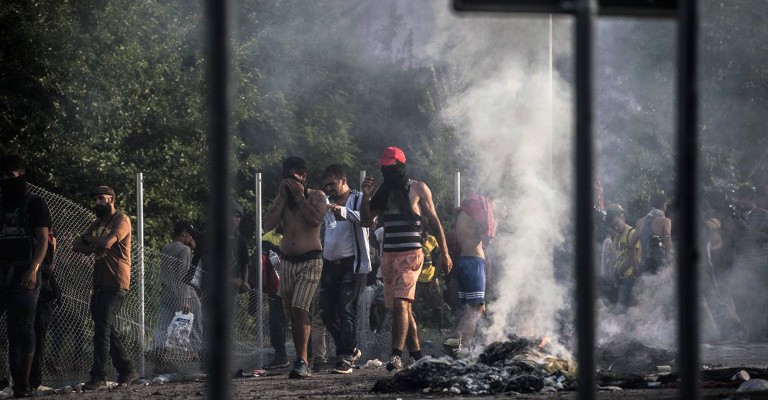 
The European Federation of Journalists (EFJ) has denounced the latest attack and arrest of journalists who were reporting the refugee crisis on the border between Hungary and Serbia today. Six journalists were reportedly beaten  on Wednesday by Hungarian border police.

According to local media reports, Warren Richardson, an Australian photographer, and Jacek Tacik, a Polish reporter together with a Slovakian journalist were accused of crossing the border between Hungary and Serbia illegally. They were beaten before they were arrested by the border police. The journalists had been working in the Serbian village of Horgoš and followed a group of refugees who entered Hungary.

On the same day, a TV crew of Radio-Television of Serbia covering the crisis was brutally beaten by the police. According to the RTS management, journalist Jovana Durovic (on the left), cameraman Vladan Hadzi Mijailovic and sound recordist Miroslav Durasinovic were brutally beaten by the police with truncheons at the Horgos border crossing in Serbia. RTS has written to the Hungarian Government and demanded that the police officers who attacked the journalists shall be punished.

Mogens Blicher Bjerregaard, the EFJ President said, “It is incomprehensible to see an EU country like Hungary constantly violating press freedom and human rights. The European Commission and international institutions must take action against these serious violations.”

“It is a prerequisite for EU member states to respect the EU Charter on fundamental rights which sets out standards on media freedom and freedom of expression.”

In the past weeks, Hungary has tightened its border using heavy handed measures to crack down on refugees and migrants from Syria crossing its border.

“The authority must release the journalists immediately and ensure free access for journalists to report on the crisis. It is important that journalists are there as watchdogs to report on any human rights abuses of the refugees during the crackdown,” added Blicher Bjerregaard.