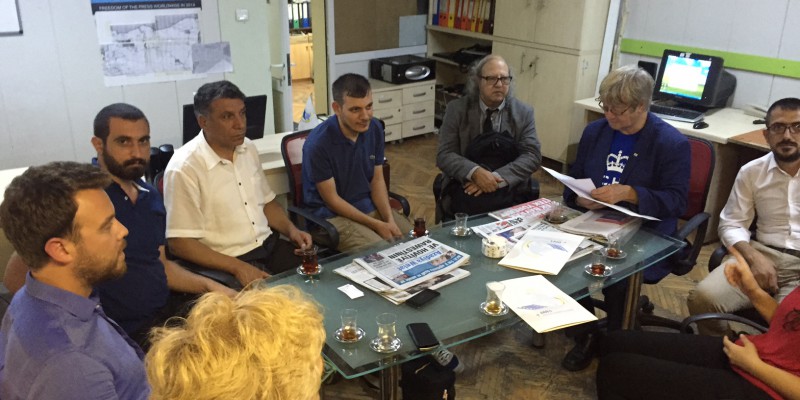 
The offices of the Kurdish daily newspaper Azadiya Welat and Kurdish news agency DIHA in Diyabakir (Turkey) have been attacked on 28/09/2015 by police forces and 32 journalists and media workers were taken into custody for interrogation for more than seven hours by the authorities.

According to media reports, Turkish police used forces, by breaking several doors, to enter the headquarters of the Kurdish media outlets and publishing houses without a proper warrant issued by the authorities. “The police said they were looking for evidence following recent explosions in the neighbourhoud. Our colleagues have asked them to show a judicial warrant to enter the building but they didn’t have one at the time of the operation”, reported Sedat Yilmaz, journalist at the Kurdish daily Özgür Gündem and board member of the Journalists Union of Turkey (TGS, an IFJ-EFJ affiliate).

Jim Boumelha, IFJ President, who recently visited DIHA press agency headquarter in Istanbul said : “Turkish authorities must be accountable for all the damages that occurred in workplaces and for the media freedom violations in Diyarbakir. Kurdish journalists hold the same rights as every other journalists in the country to report freely and to carry out their job for the benefit of the public’s opinion”.

Mogens Blicher Bjerregaard, EFJ President, said “the Turkish authorities must stop to put pressure and use violence against journalists and media outlets especially during election time where the most reliable information is needed by the public to take the right decision. European journalists stand in full solidarity with Kurdish journalists and support their right to conduct their job in a safe environment”.

The detained Kurdish journalists have been released after interrogation.

The EFJ-IFJ recently organised an international conference in Istanbul on Press Freedom and Labour Rights where leading journalists from across the political spectrum stand united in condemning the surge in attacks on press freedom led by the government in recent weeks.