Journalists role from important to essential when covering crisis 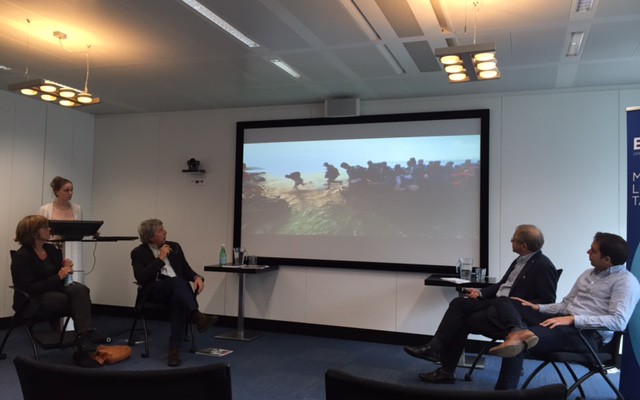 
The European Federation of Journalists (EFJ) and the European Broadcasting Union (EBU) organised today (20/10/2015) a Media Lunchtime Talk on Reporting the refugee crisis. During the past months, the media all over Europe have been extensively reporting on the refugee and migrant crisis. Despite most of them reporting responsibly, a number of questions arose about the limit of publishing sensitive images.

Nicola Frank, EBU Head of European Affairs and Ricardo Gutiérrez, EFJ General Secretary, started the discussion by addressing their common concerns on the importance of ethical reporting and the role of media and journalists in combatting hate speech and stereotypes.

“The EU media coverage on the refugee-migrant crisis has rapidly changed over the past five years. In the past, we were just receiving a few reports about the situation in Lampedusa or Ceuta and Melilla and they weren’t asking the big question – why people are fleeing from their own countries. Today’s coverage is much deeper with a specific attention on travelling refugees with family members and people leaving war zones,” said Jean-Paul Marthoz, European correspondent for the Committee to Protect Journalists (CPJ) who moderated the debate. Marthoz also underlined the differences between reports published by mainstream media and the more populist approach used by internet users on social media like YouTube. Marthoz also mentioned the picture of Aylan Kurdi, photographed by Nilufer Demir from DHA, the dead body of a little child that radically changed the EU public opinion’s view on the crises.

Alain Genestar, editor-in-chief of Polka magazine, recalled the old-British saying “the press freedom belongs to the person who owns a press organisation” and added that this is quite out-of-date in a world where all smartphones owners can publish and distribute images and contents. The role of the editor is, among others, to decide to publish or not, to appreciate the impact of a publication or, on the contrary, to fall into populism. “The large influx of pictures, sometimes unauthenticated, unprofessional, does not put into perspectives and distorts reality. If the role of a journalist was important so far, it has become now essential. We need to fight against the invasion of unverified images and explain the reality of the refugees”, said the journalist.

“The scale of the current crisis is much bigger than what we used to see at Lampedusa or Ceuta and Melilla”, added Bruno Boelpap, Europe Producer at BBC News Brussels. “We usually didn’t need to look for storytelling because almost all individuals have incredible stories to report. We were a little late on this issue as, at the beginning, most of the media attention was on the Greek crisis and referendum. It’s true that EU media are mainly following the consequences on European countries but we also reported on the refugees in neighboring countries like Lebanon and Turkey”, said Boelpap.

Isabelle Durant, former vice-president of the European Parliament and current member of the Brussels Parliament, explained that the media coverage was globally good and sometimes incredibly courageous. “Der Spiegel‘s frontpage with a welcoming message to refugees was incredibly courageous and important coming from a German publication”, said Ms Durant. She also stressed the importance of long-term coverage. “What will happen in the coming months when the focus will be on a different topic ?”, she wonders. According to her, different generation of migrants have different expectations to consider : “The first generation is basically looking for security, education and food. The second generation is usually active in the job market and the third will try to be recognized, identified as citizen”.

10 years ago journalists had an important role, today we have an essential role in our democracies says @AlainGenestar. #reporting refugees

We have no choice but to follow good & bad stories to explain the situation to the people, Isabelle Durant #efj-ebu pic.twitter.com/cTmBwZh6QQ