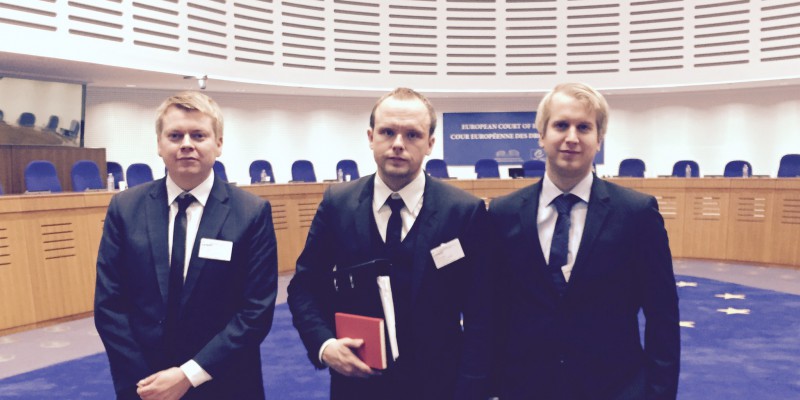 The Grand Chamber of the European Court of Human Rights has ruled by a majority (the President and three other judges expressed a dissenting opinion) that Finland did not violate the freedom of expression of photographer Markus Pentikäinen. This is a disappointing outcome to the nine-year legal battle and a setback both for Mr Pentikäinen and freedom of speech.

Mr Pentikäinen, a photographer for the Finnish current affairs magazine Suomen Kuvalehti was taking photographs at the 2006 Smash Asem demonstration in Helsinki when he was arrested for refusing the police order to leave the demonstration. Because he was documenting the final stage of the protest which was clamped down by the police. He was held unlawfully in police cells for over 18 hours.

Jussi Salokangas, a lawyer at the Union of Journalists in Finland, who assisted Mr Pentikäinen throughout the case said: “It’s a sad development that the European Court of Human Rights has taken this position. The issue sets a legal precedent of crucial importance for Europe affecting the work of journalists, including in crisis areas. It is most likely that the Finnish Foreign Ministry’s inaccurate statements concerning the case influenced the ECHR’s decision.”

Mr Pentikäinen was subsequently prosecuted and found guilty of imputed criminal liability. The Court of Appeal did not alter this judgement and the Supreme Court declined to review the case.

The ECHR ruled in 2014 that Mr Pentikäinen’s freedom of speech had not been violated. The case then went to the Grand Chamber, which is made up of 17 judges drawn from court’s member states, a highly unusual step. The Grand Chamber has never previously dealt with cases concerning freedom of expression in Finland.

“Authorities should now draw up more precise guidelines on how the freedom of expression of journalists is to be safeguarded during protests and demonstrations,” said Salokangas. “It’s our job to act as a public watchdog on power.”

The EFJ shares the questions of the four dissenting judges (the president of the court Dean Spielmann, and judges Robert Spano, from Iceland, Paul Lemmens, from Belgium, and Dmitry Dedov, from Russia):

“In the context of a public demonstration, journalists may be asked to disperse, but they should not be prevented from observing and recording the police operations,” said Ricardo Gutiérrez, General Secretary of the EFJ. “I fully share the dissenting judges’ views when they highlight that Mr Pentikäinen was apprehended when the police engaged with the last remaining protesters within the cordoned-off area, after the dispersal order had been issued. It was exactly at that moment that it became crucial for the press to be able to observe the operational choices made by the police in arresting and dispersing the remaining participants so as to secure transparency and accountability.”

“Mr Pentikäinen’s detention, the seizure of his journalistic equipment and his prosecution were simply not necessary or justified,” said Gutiérrez. The decision of the court will have a deterrent effect on journalistic activity in similar situations occurring regularly all over Europe. European governments will have now considerable latitude in imposing intrusive measures on journalistic activity in public settings where force is used by law-enforcement officials. The EFJ strongly condemns this decision. We will submit the case to the Council of Europe Platform to promote the protection of journalism. We call on Finland and other CoE member states to adopt a clear legal framework for the treatment of journalists during protests, in order to ensure the right balance between freedom of expression and safety during protests and demonstrations.“ 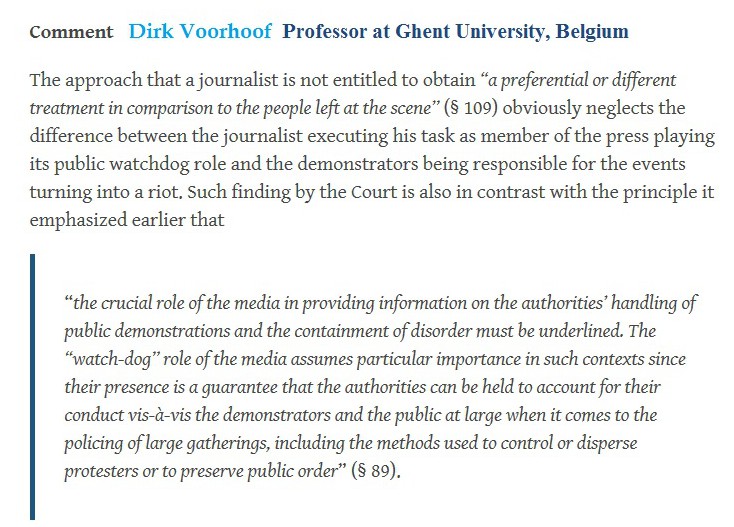