Journalists speak out against media violations in Western Balkans and Turkey 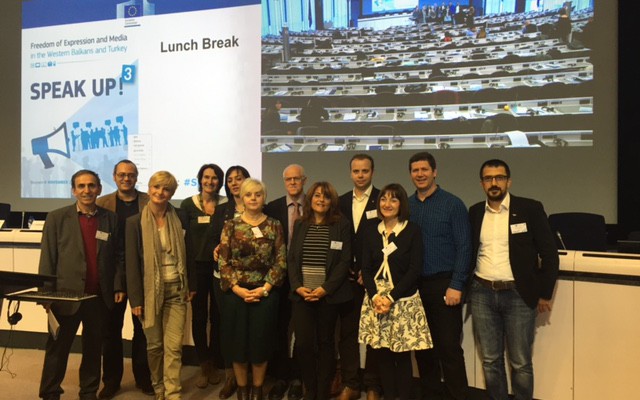 
The European Federations of Journalists (EFJ) and its members from Bosnia-Herzegovina, Macedonia, Montenegro, Serbia and Turkey (in picture) spoke out against media violations in their countries and call for more actions in a conference held on 4 November in Brussels by the European Commission (DG NEAR) to highlight the media freedom situation and progress made in Western Balkans and Turkey.

A high-level meeting, the “Speak Up conference on Freedom of Expression and Media in the Western Balkans and Turkey” was kicked off by the European Commissioner in charge of European Neighbourhood Policy & Enlargement Negotiations, Mr Johannes Hahn. Unfortunately, hardly any progress is echoed by participants in the area of media freedom.

Turkey before and after the elections: Journalists are working in a minefield while intimidation against journalists is at its worst.

Macedonia: Journalism is in a coma state. Instead of media pluralism, there is “media singularism”.

Bosnia-Herzegovina: In two years, only 9 out of 65 cases of media violations in the country have been resolved.

Serbia: Politicians are more scared of investigative journalists than of police while mercenary journalists are being hired.

These are some of the testimonies from the EFJ affiliates and other stake holders about media freedom in the region. Commissioner Hahn said at the beginning that “media freedom is not negotiable” but he failed to come up with an action plan while referring to the dire economic conditions the media is facing.

"Our leverage to improve #fundamental rights is strongest during negotiations.That's why it is essential to take the process forward". 1/2

While participants and speakers criticised a lack of will of EU leaders to voice their criticism against the political elite in the Balkans, they appreciated the continuous efforts made by the EU to support professional organisations to improve their capacity to defend the rights of journalists. Participants also recognised the work of journalists’ organisations in the region and the need to improve their capacity. In the coming months, the Macedonian Association of Journalists in cooperation with other EFJ affiliates from the Balkan will kick off an important  capacity building project funded by the EU.

More information is available at: http://ec.europa.eu/enlargement/policy/policy-highlights/media-freedom/index_en.html